Inescapable (The Premontion Series #1) by Amy A. Bartol 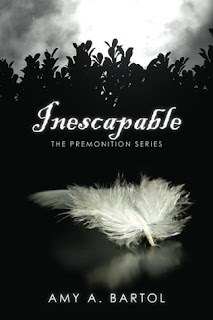 So, I know I have been very absent from my blog, but I am back! I just read a FABULOUS book by author Amy A. Bartol. It is a paranormal romance. First, a little bit about the book:


"My name is Evie Claremont and this was to be the making of me–my freshman year of college. I’d been hoping that once I’d arrived on Crestwood’s campus, the nightmare that I’ve been having would go away. It hasn’t.
I may be an inexperienced seventeen-year-old, but I’m grounded…sane. I look for rational explanations to even the strangest circumstances. Since meeting sophomore Reed Wellington, however, nothing makes any sense. Whenever he’s near, I feel an attraction to him–a magnetic kind of force pulling me towards him. I know what you’re thinking…that sounds fairly awesome. Yeah, it would be…if he liked me, but Reed acts as if I’m the worst thing that has ever happened to Crestwood…or him. But get this, for some reason every time I turn around he’s there, barging into my life.
What is the secret that he’s keeping from me? I’m hoping that it’s anything but what I suspect: that he’s not exactly normal…and neither am I. So, maybe Crestwood won’t be the making of me, but it could be the breaking of me. I’ve been left to wonder if the dark future my dream is foretelling is…inescapable"

I LOVED this book! I could not put it down and when I was forced, I was not happy about it! Author Amy Bartol takes you on a journey like no other. Evie is a great main character that starts her freshman year in college. When she gets there she meets two guys, Russell and Reed. Russell is fun-loving and great to be around. Reed shoots her menacing looks and makes it perfectly clear her doesn't want Evie around. So why does Evie feel drawn to him? An unexpected force pulling her to him? What is going on and how will she figure it out? Maybe she should just stick, with Russell, it seems like she has always known him....

The characters are so intriguing and trying to figure out the secrets is so hard! The twists and turns I didn't see coming! It was so nice to not be able to tell what was going to happen and to be surprised, for once! I don't want to spoil it, I hate it when reviews do that, so I won't. But this book is so worth your time! I love it! It does contain some cussing in it, though that was minimal and I was able to skip over it, without it interfering with the enjoyment of the book. It is a clean read as well with no inappropriate scenes in it. Five stars to Amy A. Bartol, my favorite book so far this year!!!

I purchased this book and received no compensation for this review.
Posted by Books Are Sanity!!! at 7:40 PM