Interview and giveaway with author Ada Adams of ReVamped!!

I would like to thank author Ada Adams of the book ReVamped, for taking the time for this interview.  I would also like to thank her for the donation of a kindle copy of ReVamped for this giveaway!  I personally have read and LOVE this book!  You can read my review HERE.  On to the interview! 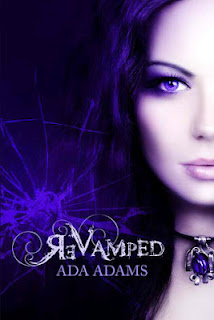 1.     How did you decide that you wanted to be an author?
Ever since I was a little girl, I have always had a passion for reading and writing. I have filled many notebooks and digital pages with various stories—some good, some not so great. When I was twelve, I actually went through a phase where I just wrote tons of book synopses. I think my reasoning was that if I started from the BACK of the book, I would eventually write the entire thing. I love exploring different personalities and stories, and tend to spend a lot of time living in pretend worlds. In order to get some peace and return to reality, I put the stories down on paper (or more often, the computer).

2.     What inspired the story of ReVamped?
I wanted to put a bit of a humorous spin on the vampire genre. The book features characters who aside from being vampires, are technically “teens/people” with real-life issues and weaknesses. It just happens that they also have problems of the “vampire variety”. :)
I have a very detailed post on the birth of the book on the “ReVamped” Blog:
www.revampedthebook.wordpress.com/2012/03/02/revamped-background/
“ReVamped” originally started as a TV show script, which grew into a novel when I realized that Dawn and her friends would simply not leave me alone until I told their tale. I grew to care for the characters deeply and cannot wait to develop their stories further. I hope you enjoy reading the book as much as I enjoyed writing it!

3.     Have you always liked the vampire genre?
My introduction to the vampire genre was all thanks to “Buffy the Vampire Slayer”. I was definitely too young to be watching such a series when it first came out, but it quickly became one of my favorite TV shows ever! I loved the blend of friendship, humor, a strong female lead and star-crossed romance. For years, I waited for my librarian to approach me and tell me that “I was the chosen one”. Sadly (and surprisingly!) that never happened…It’s still not too late, right?

4.     What made you want Dawn to be a strong female character, instead of the helpless ones so many authors use?
I believe in strong girls and women. However, even though Dawn is very strong physically, I never wanted to create a perfect, machine-like character. She has various weaknesses, which make her more “human”. She’s only known life in her father’s home, under his strict training and supervision, so once she ventures in to the “real world”, things get kind of messy. One thing that I do like about Dawn is that, even though she’s kind of a silly girl when it comes to dealing with guys, she doesn’t let them definite her entire existence.

5.     Is it a coincidence that Dawn on the cover of the book looks like you?
Yes and no. :) Dawn was originally supposed to have a lighter shade of brown hair. However, due to some last-minute model issues, I ended up having to shoot the cover myself. I worked with a wonderful photographer/graphic designer, Olga Barkhatova, and asked her to ensure that Dawn didn’t resemble me too much. I hope that people won’t immediately know that the girl on the cover is me. When I look at the book, I actually don't see myself...Which is a good thing, I hope! :)

6.     How long do you think it will be until ReAwakened will be published?
If I had my way, “ReVamped”’s sequel would be published tomorrow! Alas, there are many things that go into putting out a book that unfortunately prevent that from happening. At this point in time, I can only provide a rough date. “ReAwakened” should be out by the Summer of 2012. For a debut indie author, the support of the readers comes a long way. I’m very honored and thankful that the readers of “ReVamped” have expressed a great interest in the sequel.

7.     What is the main story (if you can tell us) for ReAwakened?
You’re actually one of the first bloggers to receive a scoop on the sequel! “ReAwakened” will take Dawn on an even more turbulent journey than “ReVamped”. We will be meeting a couple of new characters, some of which have been hinted at in “ReVamped”. One of them is quite a hottie, if I do say so myself! They’re arriving in Angel Creek to cause a lot of havoc. Dawn’s life will definitely be turned upside-down. “ReAwakened” will also have more of a romantic focus in the plot than its predecessor. The story contains many twists and turns, so a non-spoilery synopsis will be available once the book is closer to being completed. 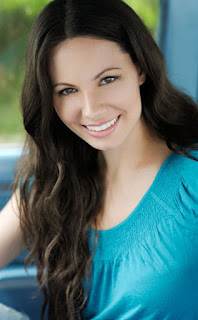 "Many people sing in the shower. I write scenes in my head and act them out."

At age five, Ada read her first chapter book - Pippi Longstocking. Ever since that moment, she developed an intense passion for the stories and characters found within the pages of literature.

In her career as an actress and a writer, Ada currently spends most of her days immersed in imaginary worlds. Much like the characters she enjoys playing and writing about, Ada is a martial artist with a Black Belt in Shotokan Karate. She is also a big proponent of lifelong learning, and has attained a Bachelor of Arts in Psychology (it aids in creating characters with unique quirks!) as well as a Master's of Science in Education.

Ada strives to bring a fresh voice and perspective to fiction. She has been writing creatively for many years, and is an editor of a global fashion/literary magazine called VEUX. "ReVamped" is her debut novel.

She lives in Toronto, Canada, and enjoys adventurous nature hikes with her adorable puppies Cara and Oreo."

For more about ReVamped and author Ada Adams, check out her website:
http://revampedthebook.wordpress.com/

And now for our giveaway of  ReVamped!!!  To enter to win a free kindle copy of ReVamped, become a follower of my blog and leave a comment about ReVamped with your name and e-mail address.  Winner will be randomly selected.  Contest ends Sunday, April 1st at 9 p.m. PST.  Thank you and good luck!
Posted by Books Are Sanity!!! at 5:00 AM