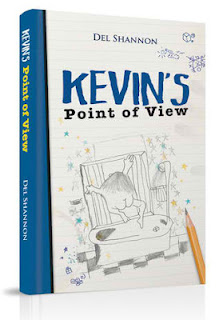 
Kevin Tobin is a relatively ordinary 12-year-old dealing with the aftermath of his father's death in a mountain biking accident near their home in Boulder, Colorado. To escape from his emotional turmoil, Kevin has developed his imagination into a dangerous foil and a powerful ally. While he antagonizes his sister through his superhero antics on an average Wednesday morning, his ability to escape inside a character's head become critical to his survival after his life is once-again turned upside down a year after his father's death. A mysterious package arrives in the mail, Kevin and his best friend are hunted down by a ruthless villain set upon world domination, and after enlisting Kevin's teenage sister and her pizza-delivery boyfriend in a battle for control over time itself, the secret of Kevin's whole existence is revealed to him by a source we never expected. Del Shannon's imaginative story, appreciation for the powers of family and the desire of young boys to both escape reality and prove themselves within it, and fast-paced, adventure-filled storytelling style make this a book with wide appeal for readers of all ages.

Honestly, it took me almost half of the book to become completely engaged in the story.  My only beef was that the first half felt long.  However, once I got through the first half, I found myself anxiously turning the pages to see what would happen next.  The main character, Kevin, is either the kind of character that you will love, or that will get on your nerves.  I tried to view him from a child's eyes, and in doing that I enjoyed the story more.  Kevin is crazy and imaginative!  He does things before he completely thinks them through, as is true of most kids.  This story takes you on a roller coaster ride of adventure!  The ending you will probably never guess, and to me, that is a sign of a great book!  A job well done to Del Shannon, Kevin's Point of View is a book unlike any other.  Three and a half stars out of five.


You can pick up the paperback or Kindle version via amazon here.

You can pick up the paperback or Nook version via barnes and noble here.

Source:  Author
I received this book for free.  This is my honest review.
Posted by Books Are Sanity!!! at 4:00 AM