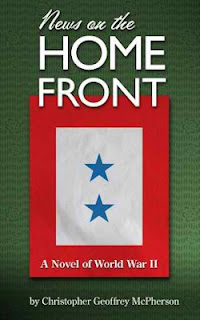 When I began working on the story that would eventually become my novel "News on the Home Front," I thought it important that it include two specific elements: how women at home dealt with the changes that came during the war years -- rationing, divided families, death of loved ones, etc.; and the role of women in the workforce. For my main characters, I chose women of means rather than middle-class women because it would allow my story a little more flexibility. So, while the characters Carole and Irene are neither middle class nor poor, the war still affected them -- just like it did every other person in America at the time.
Emerging from the crippling economic depression of the 1930s, America during the war saw many changes, perhaps none so dramatic as the entry of more than six million additional women into the workforce to replace men needed in the fighting overseas. Women in the workplace were nothing new: many women worked outside the home prior to the war. What changed was the necessity for women to work.  No longer was it a choice made by a specific woman or her family; now, there were jobs that needed to be done with no men available to do them. The only option, then, was women.
In doing my extensive research for "News on the Home Front," I was struck by just how much women contributed to the war effort. There were the obvious examples of women working in the aircraft factories building planes (as Irene does), but also women who organized neighbors to knit socks for soldiers, to work with the Red Cross to roll bandages to be used overseas, and to organize not only the many scrap drives that occurred during the war (metal, rubber, paper) but also drives to collect books and games that were shipped to soldiers so they would have additional recreational activities. I don't think it any exaggeration to say that many mountains were moved by the force of women working separately and together during the war.
Keep in mind that there was a price to be paid for women being in the workplace. Among others, this price included families breaking apart because neither parent was home (father overseas, mother in the aircraft factory) leaving juvenile delinquency to become a problem in many cities. In addition, there was the problem of women being forced to quit their jobs once men came back home -- an issue also addressed in my novel.
Clearly, though, the work women provided was a vital part of America winning the war and it is to them that "News on the Home Front" is dedicated.

In my research, I came across three radio episodes that illustrate some of the affects of women at war:
The first is an episode of "An American in England" from 1942 called "Women of Britain." Although this looks at the role of women in England rather than America, the situation there was identical to here in the states.
The second and third, from 1942 and 1943, are from the top-rated radio comedy "Fibber McGee and Molly" and look at the swift replacement of men by women workers and how unexpected that was for so many people.

You can hear "An American in England" here

You can hear "Fibber McGee and Molly"here and here.

If you have any stories of women in the workplace during World War Two, I would love to hear from you.  Please email me at NewsOnTheHomeFront  (at) Yahoo.com

Author Christopher McPherson is donating an ebook of News on the Homefront for giveaway!  This is open INTERNATIONAL!

Entering is easy!  1.  Be or become a follower of my blog through GFC.  2.  Leave a comment with your GFC name and email address!  One lucky winner will be chosen!  This giveaway is open for one week!  Good luck and Happy Reading!!!
Posted by Books Are Sanity!!! at 4:00 AM