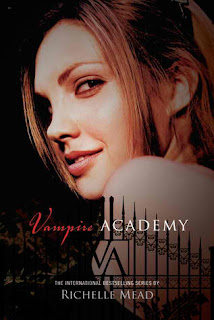 
St. Vladimir’s Academy isn’t just any boarding school—it’s a hidden place where vampires are educated in the ways of magic and half-human teens train to protect them. Rose Hathaway is a Dhampir, a bodyguard for her best friend Lissa, a Moroi Vampire Princess. They’ve been on the run, but now they’re being dragged back to St. Vladimir’s—the very place where they’re most in danger...

Rose and Lissa become enmeshed in forbidden romance, the Academy’s ruthless social scene, and unspeakable nighttime rituals. But they must be careful lest the Strigoi—the world’s fiercest and most dangerous vampires—make Lissa one of them forever.

Although a bit confusing to differentiate between the two different vampires and vampire/human hybrids at the beginning, once the story fell into place it read easily and instantly grasped my attention. The main character, Rose, is relatable, witty and I couldn't stop my laughter from her retorts! It soon became hard to put down and I was eager to see what happened next. I love all of the characters and how they never falterd to defend what they believed in most. Definitely a 5 star read!

Thank you Andy, for sharing your review with us!

You can pick up Vampire Academy via Amazon or Barnes and Noble.