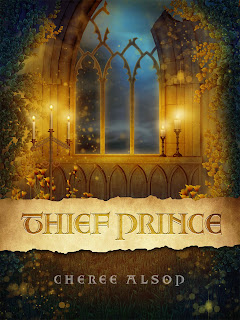 
When her brother’s sickness forces Kit to accept the title of heir to her kingdom’s crown, she is outcast by the others and treated as inferior; but when she is forced along with the other heirs on a dangerous journey, her differences turn into strengths that may save their lives. Kit is tested both mentally and physically as she faces odds both on the battlefield and within the royal social circles. She soon realizes that her greatest challenge may be to return home with her heart in one piece.

Thief Prince is a story of courage in the face of fear, and of love despite overwhelming odds. Whether you are looking for an adventure or the chance to see kingdoms beyond your world, Thief Prince is the story to sweep you away.

I have to start by saying that the cover is GORGEOUS!  If I was choosing a book by it's cover, I would definitely pick this one!  I absolutely loved this book!  I could not put it down!  Anything with a prince and princess is usually a winner for me, but this book is even better!  It has multiple princes and princesses on scene over the course of the book!  I was completely drawn into Kit's world as she was faced with danger and new circumstances.  I felt for her and she was unsure of herself and I cheered for her when she grew and became the person she was meant to be.   I was happy that Kit was a strong character, not a weak and simpering girl who couldn't do anything for herself.  The Thief Prince (Andric) was a great character as well!  I kept seeing glimpses of who he really was and I loved that the author gave us clues as to what he like under the surface.  The Thief Prince will whisk you away into a new world that you will not want to leave!  I hope that Ms. Alsop has more about this story to write, because I would love more Kit and Andric!  This is one of my favorite books so far this year!  Five stars!


You can pick up Thief Prince via Amazon, Smashwords or Barnes and Noble.