I am so excited to be a part of the cover reveal for Imaginable by author J. Meyers!  It is the second book in her series, and Intangible is the first book!  If you haven't read it, you need to head over to amazon or barnes and noble NOW and buy it!  It is awesome, you can check out my review of it here.  Now, on to the cover reveal!!! 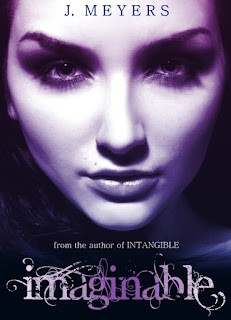 Blurb:
Twins Sera and Luke Raine’s unusual abilities are growing. Sera is healing vampires now, making them human again. And, at times, Luke can actually change the future he Sees.

But Sera’s healing has dangerous consequences, and though Luke is altering the outcome of more visions, he can’t control them yet.

Now Sera is in danger as the dark creatures of the Realm seek to use her. As Luke struggles to master his gift in order to save his sister, he discovers even more about his powers.

And what he learns just may put him in greater danger than Sera has ever been.

This book sounds so awesome and I cannot wait to read it!  For more information on its release and what else J. Meyers is up to, check out her website.