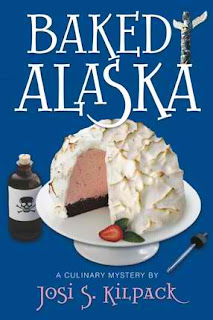 Baked Alaska by Josi S. Kilpack
An Alaskan cruise is the setting for amateur detective Sadie Hoffmillers latest adventure. Sadie plans to spend time relaxing with her two grown children, Breanna and Shawn, and her boyfriend, Pete, while enjoying the luxury and cuisine of an elegant cruise ship and helping to plan her daughters upcoming wedding. But even as the crew prepares to leave port, Sadie has suspicions about the voyage ahead and the relationship between her normally easygoing son and a mysterious female passenger he obviously knows but refuses to discuss. When the woman is discovered unconscious during the second night at sea, Sadies apprehension escalates. Over the last few years, Sadie has developed an extreme dislike for secrets and it would seem her son is keeping one from her. *Includes eight new mouthwatering recipes, tested and approved by the official bakers of Sadies Virtual Test Kitchen.

I love the culinary mystery series by Josi Kilpack!  Baked Alaska certainly did not disappoint!  In fact, I found it quite refreshing!  It was a totally different spin on the series and when I thought I had everything figured out, something else would come along to surprise me!  I enjoyed that it took place on a cruise ship and involved Sadie's entire family.  It was nice to have them altogether in the novel.  I love Sadie, I can't ever seem to get enough of her spunky and energetic character!  She makes this novel come alive and I found myself smiling frequently from her antics!  If you enjoy a good mystery novel, then you will love Baked Alaska by Josi S. Kilpack!  Five stars for a brilliant addition to the series!  Keep them coming Ms. Kilpack!


You can pick up Baked Alaska  via Amazon, Barnes and Noble or Deseret Book. 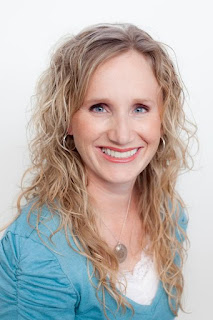 Author Josi S. Kilpack
Josi S. Kilpack grew up hating to read until she was thirteen and her mother handed her a copy of The Witch of Blackbird Pond. From that day forward, she read everything she could get her hands on and credits her writing “education” to the many novels she has “studied” since then. She began her first novel in 1998 and hasn’t stopped since. Her seventh novel, Sheep’s Clothing, won the 2007 Whitney Award for Mystery/Suspense, and Lemon Tart, her ninth novel, was a 2009 Whitney Award Finalist. Josi was the Best in State winner in literature for 2012 and currently has two books (Banana Split and Tres Leches Cupcakes) as finalists in the 2012 Whitney awards.
Josi currently lives in Willard, Utah, with her family.


Blog Tour Giveaway
$25 Amazon Gift Card or Paypal Cash
Ends 3/20/13
Open only to those who can legally enter, receive and use an Amazon.com Gift Code or Paypal Cash. Winning Entry will be verified prior to prize being awarded. No purchase necessary. You must be 18 or older to enter or have your parent enter for you. The winner will be chosen by rafflecopter and announced here as well as emailed and will have 48 hours to respond or a new winner will be chosen. This giveaway is in no way associated with Facebook, Twitter, Rafflecopter or any other entity unless otherwise specified. The number of eligible entries received determines the odds of winning. Giveaway was organized by Kathy from I Am A Reader, Not A Writer http://iamareader.com and sponsored by the author. VOID WHERE PROHIBITED BY LAW.


a Rafflecopter giveaway Source:  Blog Tour via Inspired Kathy
Posted by Books Are Sanity!!! at 2:30 AM