The Redeeming (Age of Faith #3) by Tamara Leigh, Book Review 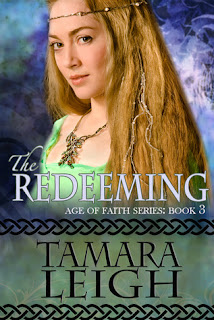 
IN THE EYES OF THE CHURCH AND MEN, HERS IS NO SMALL SIN
Lady Gaenor Wulfrith is a woman scorned—and now King Henry’s pawn. After three broken betrothals, she is ordered to wed her family’s enemy, a man she has never met and has good reason to fear. Faced with the prospect of an abusive marriage that will surely turn worse for her when her sin is revealed, she flees her family’s home with the aid of a knight—a man who could prove her ruin.
Christian Lavonne, the only remaining heir to the barony of Abingdale, has thrown off his monk’s habit—and God—to minister his lands. Determined to end the devastation wrought by his family’s feud with the Wulfriths, he agrees to marry his enemy’s sister—a woman no man seems to want. When he learns she has fled with a knight who has broken fealty with the Wulfriths, he pursues her, knowing that when they meet his own sin will be revealed and he will be as much in need of redemption as the woman who may carry another man’s child.

I am a huge fan of the Age of Faith series by Tamara Leigh and I have been counting down until the release of The Redeeming! It did not disappoint! This book is about Gaenor Wulfrith who in the previous book, fled from an arranged marriage. I really enjoyed the preface where the two main characters get to know each other while one doesn't realize that the other is their betrothed.  Add in a woman who feels that she is less than beautiful, who has committed a sin that is soon to be revealed, and then flees her arranged marriage again! The emotions that were portrayed felt absolutely real, I was completely caught up in the feelings and story-line of the book! Tamara Leigh writes beautifully and I feel like I am seeing, feeling and experiencing everything right along with the characters! If you like Christian novels or medieval romance with some suspense, then you will love The Redeeming! I am so excited there will be another book in the series and I look forward to reading it!
I received a copy of this book for free in exchange for my honest review.
Rating: Clean/Christian


You can pick up your own copy of The Redeeming via Amazon.