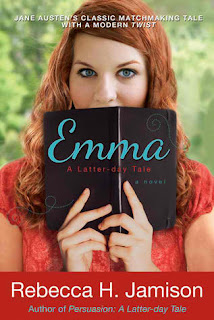 Emma isn’t so good at the whole life-coaching thing. Her first client ended up with a broken heart and is threatening to relapse in her bad habits. Now Emma has problems of her own to deal with, and all those problems start with one name: Justin.

Justin is her best friend, so it’s hard for Emma not to feel betrayed when she suspects he is falling for her childhood rival. And she knows she’s losing him despite her best efforts. No matter how much she tries, she keeps running up against obstacles. How is she supposed to help other people when she’s drowning in her own failures?

Fans of Jane Austen’s Emma will love this modern retelling of the classic romance novel. Fall in love with Emma’s latter-day tale of redemption, forgiveness, and the quest for true love.

Emma:  A Latter-day Tale is an LDS re-telling of Emma by Jane Austen.  Emma is your typical Emma, she is constantly trying to be a matchmaker with her friends and neglects her own feelings.  She is frustrating at times and at others so sweet.  Her flaws are what make her someone you can relate to and someone who is realistic.  Justin is her best friend and a true constant in her life, yet she finds herself doubting even her trust in him.  Will she help others find true love or will she make the ultimate match...her own?

I really enjoyed this novel and the LDS aspect of it is so small that I don't think someone who is not LDS would be bothered by it.  It is in no way preachy, it just talks a little bit about prayer and forgiveness.  The overall flow of the book is nice and it is an enjoyable read.  Emma's character is what makes the book so great and entertaining!  The supporting characters are all diverse and they rounded the story out beautifully.  If you enjoy Austen re-tellings then Emma:  A Latter-day Tale is a book you will enjoy!

It was amazing how much more snow Phil could pick up with his shovel than I could with mine. He cleared three feet of the driveway before I was done with one.
“When we’re done, if you have time, you should come in and meet Harri. I think you two will get along.”
Phil stopped and looked at his watch. “I’m planning to do a couple more driveways before it gets dark.”
“I’ll go get Harri now if you’re in a hurry. She wants to meet you.”
Phil leaned on his shovel. “Harry is a she?”
“Her real name is Harriet. She moved here a couple months ago and she’s hardly met anybody. I think you’ll like her.”
Phil threw his head back, laughed, and started shoveling again. “I thought you were trying to introduce me to your new boyfriend.”
“You think I would be out here shoveling snow while my new boyfriend stays inside?” I grabbed a handful of snow and threw it at him. I didn’t mean to hit him in the face, but that’s where it landed.
Phil wiped the snow off his face and grinned. “I wondered why you were dating such a loser.” I expected him to throw a snowball at me, but he just stood there. “So you don’t have a boyfriend?”
I giggled a little at his awkwardness. “Nope. Harri doesn’t either.”
Phil threw another shovelful of snow away from the driveway. “So you . . . I mean, you and your friend are . . . available?” Phil didn’t open his mouth enough when he talked. That was the one thing about him that always distracted me. I couldn’t help staring at his mouth.
I had to force myself to look into his eyes. “Why is that a shock, Phil? Every woman in that house right now is available. You can take your pick—Harri, me, or Barbara. You’re surrounded by single women.” It was safe to assume Phil wouldn’t pick me. I was at least three inches taller than he was, and it was a rare man who dated a taller woman. 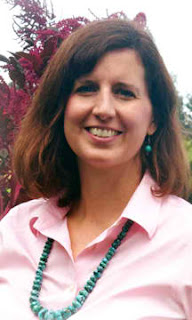 Looking for love? Rebecca H. Jamison would love to set you up with that special someone, but you’re better off reading her books. She has a terrible track record as a matchmaker.

Rebecca grew up in Virginia. She attended Brigham Young University, where she earned a BA and MA in English with an emphasis in creative writing. In between college and graduate school, she served a mission to Portugal and Cape Verde.

Rebecca enjoys running, dancing, reading, and watching detective shows. She and her husband have six children. You can learn more about her at  www.rebeccahjamison.com

You can pick up your own copy of Emma:  A Latter-day Tale via Amazon or Barnes and Noble.