Welcome to Author Kelly Martin!  She is here today on Books Are Sanity to share about her newest release, Big is Beautiful!  Check out this gorgeous cover! 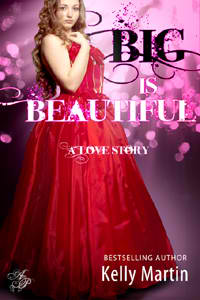 I'm so excited to be here and talk about my new book bestselling book, BIG is BEAUTIFUL.
Brittany has a big problem (pun intended). She's not the smallest girl in her class which wouldn't be so bad except for Kendra Moses-- beautifully wicked Kendra Moses-- who taunts her about it every day.
For her part, Brittany just wants to be invisible. It's working out pretty good for her until her mom signs her up for math tutoring-- and that tutor turns out to be football hunk Matt Taylor.
Yeah... I don't see any conflict here either ;)
BIG is one of my favorite books. It was honestly the easiest I ever wrote. I never had a Kendra Moses (or a Matt Taylor for that matter), but I was always on the bigger side in high school. I love Brittany's wit and her attitude. I think a lot of people can relate to not only her sassiness, but her vulnerability.

BLURB:
The seven worst words ever spoken came out of Brittany Gregory's mom's mouth at breakfast, "I signed you up for math tutoring." Sure, she probably needs it (probably nothing, she'll fail without it), but the thought of having to stay in that school longer than she had to every day makes her sick. It's not the school's fault... just the few jerks inside.

Brittany's tutor is none other than Matt Taylor, senior quarterback-- all around hottie. At first, she's shy around him because, hello, Matt Taylor! But as he shows more and more unexpected kindness toward her, Brittany softens around him.

Unfortunately for Brittany, Matt's former girlfriend, the beautifully wicked Kendra Moses, has tormented Britt since eighth grade about her weight. In an unusual moment of brains, Kendra realizes Brittany's initials spell B.I.G.-- a hilarious (to the cheerleader) irony since Brittany isn't the smallest girl at school.

With the Red Ball (Valentine's Dance) approaching, Brittany has to decide if her growing feelings for Matt are real, or if he's secretly been playing a part in Kendra's game all along.

EXCERPT:
The bus dropped me off at the same time it always did: 7:50. Same morning time, much later and much more embarrassing afternoon time. All because my mom signed me up for tutoring. Technically, I supposed, since I was the one who couldn’t do geometry, it was my fault.
As if I didn’t have enough going against me, now people… well, people who cared… would know I stunk at math. Ugh.
After I stepped off of the bus, I slung my backpack over my shoulder. Feeling the cold morning chill pelting me, I zipped my new coat higher around my neck and tried to cover every bit of exposed skin I could. I must have slowed or shifted or done something to tick off the guy behind me because he decided to take it upon himself to yell loudly and with much annoyance, “Move it, Big. I know you have a lot of blubber to carry around. Give the rest of us a break, would ya?”
And there it was. The first use of my nickname today. It wouldn’t be the last. My name at school was Big like Jillian’s name was Jillian and Kendra’s name was Kendra… well, some people called Kendra other names besides Kendra, but never in front of her face, and never with a crowd around.
Of course, like always, snickers followed. You’d think my peers would get tired of it by now. It had been the same thing, the same taunting by the same jerks since I was in eighth grade and got a little bit on the chunky side. I’d never be a supermodel, but I wished they would give me a break! My entire life didn’t revolve around eating. I didn’t eat fast food every night and sit around like a log. Grandma Duke on my mom’s side had been big boned, and I supposed I inherited the dreaded gene from her. Having never seen my biological father nor his side of the family, I had no idea if I’d been doubly cursed.
Man, I sounded like a whiner.
“Big!” Caleb, the guy behind me, tapped me hard on the shoulder like I was deaf. Guess he thought I was too fat to hear. Guess I’d start walking slower… guess it was on purpose. Oh, to have the control.
“Move it! I have a class to get to.” He pushed me out of the way so hard I slammed against the brick wall. It was enough force to scuff the top of my right hand. Little droplets of blood beaded out of the scrapes.
“Can you even fit through the door?” He laughed, not taking a second look back at the girl leaning against the building in shock. I’d been made fun of before, laughed at, shunned, but I’d never been pushed. Never had physical evidence.
A steady stream of my fellow students walked by me, some giggling and some just ignoring me. Others looked sad for me, which strangely was worse. I felt a hand on my shoulder which surprised me. My head shot up, and when I saw who it was, my mouth went instantly dry.
Matt Taylor.
The Matt Taylor!
“You okay?”
I couldn’t make my lips work. Matt Taylor, senior football star (star was too little of a word. Matt was a legend at , leading the team to the first ever 2A championship in December) stared down at me. His pale blue eyes were soft. “Are you hurt?”
I still hadn’t spoken, just stared at him like I’d never seen a guy before in my life. I’d seen them before, had seen Matt before, but I’d never talked to him. Finally, blood ran back into my brain and I shook my head, forcing myself to stop acting like a stupid groupie. “Yeah, I’m fine. Sorry to block your way.”
“You’re not.”
Sure. “Anyway. Thanks for stopping.”
He smiled, showing his famous dimples. I was so gawking at him. “No problem. I’ll see you later.”
“Okay.” I watched him walk through the double doors and snapped out of my daydreaming when the ten minute bell rang. I started walking then hesitated. See me later? We didn’t have any classes together. 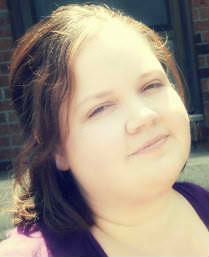 AUTHOR BIO: Kelly Martin a southern girl who writes... a lot. She is the author of the bestsellers SAINT SLOAN and THE DECEPTION OF DEVIN MILLER. Her first novel, CROSSING THE DEEP, won the Grace Award for best Young adult novel. By day, she is a teacher. By night, she has her hair in a bun and her fingers on a keyboard. She loves God, is addicted to chocolate, and would rather write than sleep. Kelly loves a good mystery and believes in Sherlock Holmes.

You can find her at http://kellymartinbooks.blogspot.com/