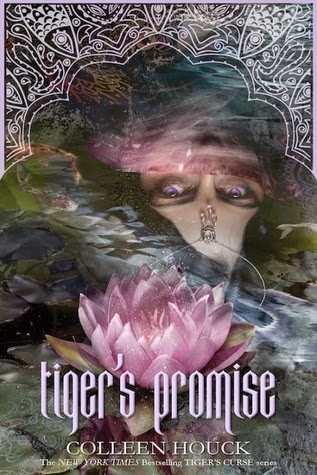 Before the curse, there was a promise. A prequel to the bestselling Tiger’s Curse series, this much anticipated novella recalls the beginning of Ren and Kishan’s story. Before Kelsey there was a girl, raised by a villain, whose love for a hero changed the course of history.
Trapped under the thumb of her abusive and powerful father Lokesh, Yesubai struggles to keep her own magical abilities secret while evading his dark powers. When Lokesh promises Yesubai to the prince of a neighboring kingdom, she becomes the central pawn in his plot to destroy the ruling family and take power for himself. Yesubai is trapped by her father’s threats and desperate to protect the man she comes to love, but she knows that any decision she makes will have dire consequences. As dark forces gather around her, Yesubai must decide if she’s willing to reveal that somewhere deep within her she has the power to change everything.

I really enjoyed reading the prequel to the Tiger's Saga. In Tiger's Promise I learned so much more about Yesubai and also how truly cruel and wicked Lokesh was even to his own child! It really helped me as a reader understand more of not only his character, but Yesubai. I really felt so much sympathy for he to situation but I also felt the weight she felt bearing the burden of her father's evilness and her love for a man she couldn't marry. I don't want to spoil the end, but I will say that everything about the curse makes more sense to me now. Once again Houck has amazed me with her enchanting storytelling skills which ensnare my attention and have me completing living in another world!