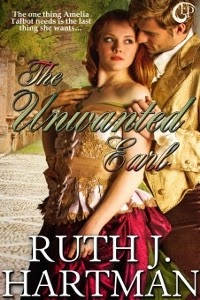 Amelia Talbot has been issued a death sentence. At least it feels that way. The thought of marrying a man old enough to be her grandfather sends her into a panic. So much so that she sets off on a desperate search to find another man to marry her—quickly. Conrad Croome, the Fifth Earl of Lofton, knows all too well that blackmail isn’t the way to form a marriage. How ironic that one Amelia Talbot uses a Croome family secret he’d thought long buried to force him to marry her.Is Conrad doomed to a life of marriage based on an exposed secret, or could Amelia learn to love an unwanted earl?

The Unwanted Earl is Conrad's story.  He seemed so non-redeemable to me in the Love Birds of Regent's Park that I could not imagine liking him....at all...EVER!!!  However, every now and again an author will turn the tables on the reader and have you begin to have an inkling of sympathy for the character until before you know it, you are rooting for them!  I couldn't believe the magic Hartman wove by swaying by opinion of Conrad!  The incidents with Conrad and his distaste for the outdoors and all animals brings a smile to my face just thinking about it!  I laughed and laughed about each mishap that seemed to always befall him.  Poor Conrad!  I loved the changes that he began to make for himself and how he went from terrible villain (in my opinion) to a good guy. This is a fun and light read with a few serious notes in it, which are what I have come to love and cherish about Hartman's work!  If you want to laugh, smile and enjoy a great story then The Unwanted Earl is the book you want to pick up!

Source:  Author for review
Posted by Books Are Sanity!!! at 1:00 AM