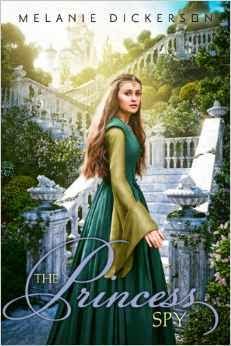 Margaretha has always been a romantic, and hopes her newest suitor, Lord Claybrook, is destined to be her one true love. But then an injured man is brought to Hagenheim Castle, claiming to be an English lord who was attacked by Claybrook and left for dead. And only Margaretha---one of the few who speaks his language---understands the wild story. Margaretha finds herself unable to pass Colin's message along to her father, the duke, and convinces herself 'Lord Colin' is just an addled stranger. Then Colin retrieves an heirloom she lost in a well, and asks her to spy on Claybrook as repayment. Margaretha knows she could never be a spy---not only is she unable to keep anything secret, she's sure Colin is completely wrong about her potential betrothed. Though when Margaretha overhears Claybrook one day, she discovers her romantic notions may have been clouding her judgment about not only Colin but Claybrook as well. It is up to her to save her father and Hagenheim itself from Claybrook's wicked plot.

Wow, wow, wow!  I keep wanting to pinch myself to make sure that this series is real!   Dickerson has done it again!  Every time she releases a new book I am beside myself from anxiousness to get it in my hands, and once I have it, it never fails that I cannot put it down until I am finished!  Dickerson has an amazing storytelling ability where she is able to weave together historical elements, romance, conflict and strength through faith all into one breathtaking story!  The Princess Spy is just such an example of her artistry as a writer.  I found myself watching the entire story unfold in my mind from the details she provided and the emotional connection I felt to each character was surreal.  I became lost in The Princess Spy and Margaretha and Colin's story.  At times I wanted to cry, laugh, and at other times I was afraid and my heart was pumping in fear for the characters' lives!  This is how real this story became to me!  I cannot find the words to give it enough praise!


**(I call it a series, but all the books can all be a stand alone. I prefer to read them in order and feel the connection between characters)