Heart of the Ocean by Heather B. Moore, Book Review 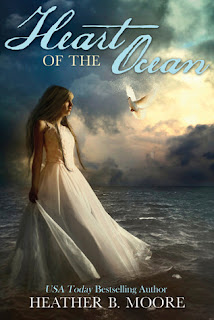 Except for maybe her life.

In Heather B. Moore’s enthralling 1840’s historical romance, Heart of the Ocean, Eliza Robinson has turned down the very pretentious Mr. Thomas Beesley’s marriage proposal. As a business partner of Eliza’s father, Thomas quickly discredits the family and brings disgrace to the Robinson name.

While her father scrambles to restore his good name in New York City, Eliza flees to the remote Puritan town of Maybrook to stay with her Aunt Maeve. Maybrook is the last existing Puritan town, having survived centuries of outside influence. Although relieved to be away from all- things-male and unforgiving gossip columns, odd things start to happen to Eliza, and she is plagued by a ghostly voice. Her aunt’s explanation? That Eliza is being haunted by a woman who died of a broken heart twenty years ago.

After Aunt Maeve is tragically killed, Eliza's life is put in danger as she tries to uncover the mystery of her aunt's death. She encounters Jonathan Porter in Maybrook, whose presence in the town seems suspicious, yet she finds herself drawn to him. When she discovers that Jonathan’s dark secrets may be the link between the dead woman who haunts her and her aunt’s murderer, Eliza realizes that Jonathan is the one man she should never trust.

Well this book started off a little bit slow for me, but the foundation was being laid and once all the pieces came together I really enjoyed the book! There were so many layers and pieces that needed to be put together and I found myself anxious to learn why Helena was haunting Eliza. I became frustrated with Jon when he couldn't realize and accept his true feelings and I really wanted to reach through the pages and punch Thomas Beesley straight in his nose! This is a beautifully written and poignant journey that I am glad I was a part of! Very different than what I am used to from Moore, but quite a pleasant surprise!


You can pick up your own copy via Amazon!