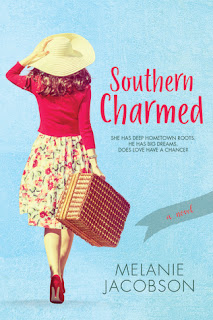 Lila Mae Guidry is a Southern girl through and through. As a fourth-generation Latter-day Saint in Baton Rouge, Louisiana, she’s proud of her heritage as both a Southerner and a Saint—and she doesn’t take kindly to people who disparage either. Ten years ago, Max Archer was just that kind of jerk. As the mission president’s son, Max spent his entire three years mocking the South . . . and teenage Lila. After Max’s family moved away, Lila forgot about her sworn enemy. Almost. When a new job brings a grown-up Max back to Baton Rouge, Lila is less than thrilled with his reappearance, especially since everyone seems intent on throwing her together with this old adversary. Yet fight as she may, Lila soon realizes resistance is futile—their connection is undeniable. Max embodies everything she wants in a man—except perhaps the most important thing—her life is rooted in the city she loves, but his dreams are bigger than Baton Rouge. With such mismatched visions of the future, Max and Lila are faced with a life-altering decision: jeopardize their aspirations or risk losing love.


Southern Charmed by Melanie JacobsonI was charmed by this story about Lila and Max. Two people who share a misunderstood past and are now reconnecting ten years later. I thought Max was the epitome of a great catch! Good looks, intelligent and full of patience for all that is Lila. He was much more patient than I would have been! Underneath the fun in this story is an underlying tale of learning to deal with loss and grief. I felt like Hattie was an integral part of the story and her story was an important one aside from Lila and Max's story. Learning to move on, learning to love again, learning to forgive; Southern Charmed isn't just a fluff and stuff romance. It has layers and pieces to it that come together to make it one great book you will not soon forget.


Source: Publisher for review
Posted by Books Are Sanity!!! at 1:00 AM