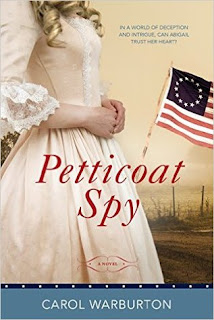 Colonial Massachusetts, 1775
Abigail Stowell is a rarity for her time. The comely young woman is educated, outspoken, and attuned to the charged political climate around her. She is a staunch Patriot. In short, she is a rebel. So when Gideon Whitlock, an avowed Tory, rides into her village, Abby is not only put off by his politics and arrogance but is also annoyed by her undeniable attraction to him.

When she observes a clandestine meeting between her Patriot father and Gideon, Abby soon realizes that in a world divided by loyalties, not everything is as it seems. Soon she is drawn deeper into political intrigue than she ever dreamed possible. And just as feelings begin to heat up between Abby and Gideon, the shot heard round the world ignites the beginning of war between the colonists and the British redcoats. There is no time for hesitation, and Abby finds herself thrust into a world of intrigue, treachery, and terror. Lives hang in the balance, and Abby will stop at nothing to support the Patriot movement—but will her allegiance to the cause mean losing the man she loves?

Warburton does a great job setting the stage during the Revolutionary War with the Stowell family and specifically Abigail. From the start you know that Abigail is different, she is spunky and more adventurous than your typical nineteen year old. Petticoat Spy is a historical romance with action and intrigue that historical and action/adventure readers will both enjoy! Join Abigail on a journey like no other! Spying, daring yet courageous moves and romance!