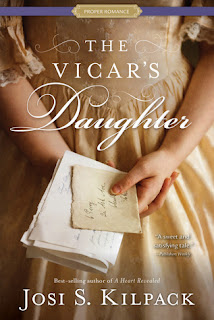 Cassie, the youngest of six daughters in the Wilton family, is bold, bright, and ready to enter society. There's only one problem: her older sister Lenora, whose extreme shyness prevents her from attending many social events. Lenora is now entering her third season, and since their father has decreed that only one Wilton girl can be out at a time, Cassie has no choice except to wait her turn.

Evan Glenside, a soft-spoken, East London clerk, has just been named his great-uncle's heir and, though he is eager to learn all that will be required of him, he struggles to feel accepted in a new town and in his new position.

A chance meeting between Evan and Lenora promises to change everything, but when Lenora proves too shy to pursue the relationship, Cassie begins to write Mr. Glenside letters in the name of her sister. Her good intentions lead to disaster when Cassie realizes she is falling in love with Evan. But then Evan begins to court Lenora, thinking she is the author of the letters.

As secrets are revealed, the hearts of Cassie, Evan, and Lenora are tested. Will the final letter sent by the vicar's daughter be able to reunite the sisters as well as unite Evan with his true love?

I was sort of blown away by this book; I honestly expected a good regency, but this was amazing! Cassie who is the youngest of six daughters to the local vicar cannot "come out" until her older sister is married. She feels it is so unfair, which come on, I am with her, it is completely unfair! Why does she have to wait for her sister? It is crazy, but anyway, that is the rule of their family! So Cassie has this brilliant idea that she will write to a potential suitor for her sister, as if she is her sister! So then if her sister is settled, she can be out in society and enjoy all the fun she has been missing out on. So she sends off the first letter posing as her sister Lenora, and it just spirals from there! She quickly becomes embroiled in a bigger mess than she ever could have foreseen and I kept wondering how and if it would ever resolve so that all involved would be happy and content! I could not stop reading, I just loved Cassie's story, and watching her grow and change. This is one regency I will not soon forget! Grab a copy and settle in your favorite chair because you will not be moving until you have read every last word!