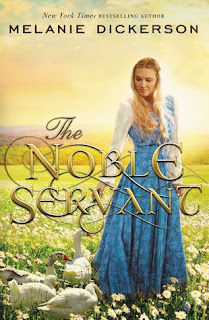 She lost everything to the scheme of an evil servant. But she might just gain what she’s always wanted…if she makes it in time.

The impossible was happening. She, Magdalen of Mallin, was to marry the Duke of Wolfberg. Magdalen had dreamed about receiving a proposal ever since she met the duke two years ago. Such a marriage was the only way she could save her people from starvation. But why would a handsome, wealthy duke want to marry her, a poor baron’s daughter? It seemed too good to be true.

On the journey to Wolfberg Castle, Magdalen’s servant forces her to trade places and become her servant, threatening not only Magdalen’s life, but the lives of those she holds dear. Stripped of her identity and title in Wolfberg, where no one knows her, Magdalen is sentenced to tend geese while she watches her former handmaiden gain all Magdalen had ever dreamed of.

When a handsome shepherd befriends her, Magdalen begins to suspect he carries secrets of his own. Together, Magdalen and the shepherd uncover a sinister plot against Wolfberg and the duke. But with no resources, will they be able to find the answers, the hiding places, and the forces they need in time to save both Mallin and Wolfberg?

The Noble Servant by Melanie Dickerson

This story grabs the reader immediately and pulls them straight into the medieval era and Magdalen's life.  Dickerson possesses magic in her fingertips because she weaves such a spellbinding tale that the reader cannot put it down! Magdalen's character drew me in with her sweet disposition and her kind and beautiful heart. I had no idea how she would resolve her situation but I knew she would persevere somehow because she never gave up. Her kindness towards others and her faith in God made for a heroine that all women would want to be like. My heart was pumping with adrenaline for all of the precarious situations she and Steffan found themselves in! And man was Steffan handsome, he would make any girl swoon with his good looks and chivalrous personality! Dickerson has done it again with The Noble Servant! She transported me to another time and place to where I forgot my world completely and became entrenched in Magdalen's! Bravo for a beautifully written Christian medieval tale! Five stars and I cannot wait for whatever Dickerson writes next!

I received a copy via Netgalley.

You can pick up your own copy via Amazon.
Posted by Books Are Sanity!!! at 1:00 AM