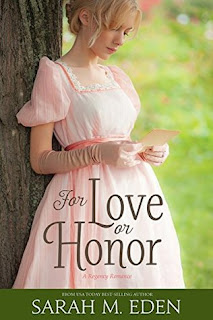 From the moment they met, Marjie’s heart has belonged to handsome Captain Stanley Jonquil, younger brother of the Earl of Lampton. But six long months ago, when Stanley’s sense of honor required that he do as he had sworn and return to the Continent to fight in defense of King and country, neither Stanley nor Marjie could have dreamed what the cost of his service would be. It has been ages since Stanley last wrote, and Marjie and the Jonquil family are plagued by his unknown fate—until the day he unexpectedly reappears. Marjie’s joy, however, is quickly shadowed by confusion—the aloof, battle-worn soldier before her is not the man he once was. In the wake of Stanley’s blatant disinterest in renewing their acquaintance, Marjie’s devastation turns to determination as she vows to help him find peace. But his scars run far deeper than anyone realizes. Despite his feelings for her, Stanley believes Marjie deserves a man whose hands are not stained with the violence of battlefields and whose mind and heart are not haunted by the horrors he has seen. Honor requires Stanley to return once more to the life he has grown to despise, one he knows will destroy him in the end, even as his heart beckons him to stay with Marjie, the only woman he could ever love, and the promise, at last, of redemption.

Eden does a superb job in writing a beautiful yet heartbreaking love story. I love the Jonquil brothers, their stories thus far have been ones I have been able to get totally lost in. Stanley's story is no exception. I found myself hurting and broken for Stanley and all he had endured and heartbroken for Marjie and all she had suffered along the way. An aching and beautiful story of a love that seems impossible, a life that seems to have only one direction it can go, For Love or Honor kept me enthralled until the very end. The good, the ugly, the pain and the heartache...all of it laid bare to be seen, I applaud Eden and her ability to wrap the reader up inside a story that it becomes real.