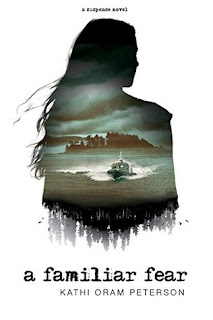 Ex-FBI agent Riley Scott lives each day with the scars of her former career. After the murder of her husband and the recent attempt on her own life by the Russian mafia, her heart is irrevocably broken. Agate Island seems like the perfect place to begin building a new future for herself and her teenage son, yet even before the ferry docks at their new home, Riley realizes there will be no escape for her. There, on the boat, is mafia boss Maksimillian Petruso—the man who took everything from her. The man she killed.

Matthew Taggart knows who Riley is and understands her reaction to his resemblance to Maksimillian Petruso. But Matthew is nothing like his estranged criminal father. So far, he has been able to hide from that evil world. However, he's afraid Riley's appearance on the island may lead his family's mafia connections to his doorstep. After all, she is the agent who took down his father.

Matthew needs to leave town. Fast. Unfortunately, when the family wants to find him, there is nowhere he can hide. Now he and Riley are thrown together in a dangerous connection, and learning to trust each other is their only hope of survival.

Peterson grabbed my attention and held it until the very last word was read. I felt like I was there with Riley, feeling her earth shattering fear when she thought she saw the man who had killed her husband. Every single time I thought I had this story figured out, Peterson threw me another curve ball! I kept thinking, I've got this, and how wrong I was. I was kept on pins and needles as the tension grew, stakes were raised and time was running out! If you love action suspense novels with a hint of romance then you must read A Familiar Fear! It will not just hit every mark, but surpass it!