Ashes on the Moor by Sarah M. Eden, Blog Tour 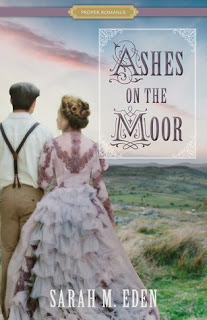 When Evangeline is sent to live in a small mill town in Northern England as a schoolteacher in 1871, she finds herself struggling to fit in with an unfamiliar culture. Raised with the high-class Victorian values and ideals of a sophisticated upbringing, she is unprepared for the poverty she finds in the gritty factory town of Smeatley, where the locals speak with a hard-to-understand Yorkshire accent and struggle to thrive with few resources or opportunities.

Though she has no training as a teacher, she must prove herself successful before her grandfather will release her substantial inheritance to her and allow her to be reunited with her younger sister, the last remaining member of her family after a fever claimed the lives of her parents and brothers.

Evangeline's sudden change in circumstances is complicated when her aunt—a woman who values class distinctions more than her family relationships—forbids her from acknowledging any connection to her or to her grandfather, Mr. Farr—the man who owns nearly the entire town. For the first time in her life, Evangeline is truly alone.

Heartbroken, she turns to the one person in town who has shown her kindness—an Irish brick mason, Dermot, and his son, Ronan. Despite the difference in their classes and backgrounds, Evangeline and Dermot become friends, due in part to her ability to connect with Ronan, whose behavior requires special attention. The boy is uncomfortable around strangers and rarely even speaks to the other children in town. He often fixates on details other people ignore, and he adheres to specific, self-made rules that give his life order and structure; for example, Dermot's coat must be hung on a specific peg next to the door.

Evangeline attempts to prove herself a worthy teacher and earn the respect of her hard-to-understand students. Determined to find a way to introduce them to "proper English" while still honoring their unique language and culture, she enlists the help of a local family to write down familiar stories in the Yorkshire vernacular. Because of her efforts, the students and their families warm to Evangeline and she continues to look for ways to give the children a chance to become more than factory workers in the local cotton mill.

When the town learns of her upper-class status, Evangeline must work twice as hard to win back their trust--especially Dermot's. In the end, Evangeline and Dermot discover that, even though they come from different social spheres, together they can overcome social prejudices, make a positive difference in the lives of even the humblest people, and enjoy the strength that comes when two hearts find each other.

Ashes on the Moor is the inspiring love story of one Victorian woman's courage to fight against all odds, and the man whose quiet strength gives her the confidence to keep trying.

This Victorian novel is unlike any I have read, ever. I was immediately drawn into Evangeline's story. How could one not be drawn in when it starts off with two sisters losing their entire family at once? I was so sad for them and concerned for where they would go and who would care for them. Let's be honest, Aunt Barton was awful, cold and unfeeling so I knew she couldn't possibly care for them. Which she didn't, she sent them away and demanded that no one know they were related! It was awful and horrible! Evangeline's only family other than her little sister Lucy, and she treated them so terribly! I felt this huge weight pressing down on me while I read this book. I kept thinking that surely it was some big mistake; Evangeline being forced to care for herself and separated from her only sister. I kept thinking that surely the Bartons or her grandfather was going to rescue her from this awful situation. While I literally zoomed through the book, I was still left saddened. I think I wanted more upliftment and more triumph. I don't want to spoil it, but just suffice it to say that I wanted more happy from the book than what I was given. I love Eden's writing style, her historical aspects were spot on, I just personally wanted more sunshine and rainbows!