Everything She Wants by Sarah Alva, LDS Blog Tour & Giveaway!!! 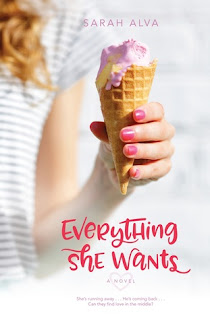 Lucy Kappal can't figure out why she doesn't want to marry her sometimes-boyfriend, Charles. After all, he's perfect on paper: a returned missionary, elders quorum president, a professor at BYU. Instead of giving Charles an answer to his unexpected marriage proposal, she boards the next flight to London only to fall at the feet of the handsome pilot. The encounter leaves her heart pounding in a way it never has with Charles, and she becomes even more smitten when she sees the pilot again at her hotel.
Emerson James is in London to deposit the last of his mother's ashes in Kensington Gardens. And after a fifteen-year absence, he is attempting to return to the Church as a way to find peace with his mother's death. But the Church's culture feels foreign, and he's about to give up on ever becoming a "good Mormon" when he meets Lucy in the hotel lobby.
Lucy and Emerson's new friendship opens their worlds to new possibilities and leaves them wanting more. But Lucy is torn over her feelings for Charles, and Emerson isn't sure how committed he can be to the Church, even knowing how important it is to Lucy. Inevitably, the realities of life force them apart. If given a second chance, will they have the courage to risk everything for a once-in-a-lifetime love?

So it took me a few chapters to completely get into the story, but man, once I did, I could not stop reading! Lucy ran away from Charles, he seemed good on paper but he was just not right for her. She runs into this handsome pilot while she is in London and the sparks just fly between them. But can they make things work? Emerson isn't sure he is invested in the gospel and is Lucy just rebounding from her breakup with Charles? Fast forward six months and all chaos for Lucy begins. What decisions will she make for her future? The practical one on paper or the one that makes her heart sing?
I really enjoyed Alva's ability to put in her novel LDS culture issues and addressing them in a direct way. It definitely added an authenticity to the story that other LDS novels lack. It felt current and it included issues LDS women face in the world today. I also want to note that the supporting characters were every bit as important as the main ones and Alva seamlessly wrote a story that addresses issues people face today. I truly enjoyed the entire book and my only complaint is that there wasn't more to read!