Night At the Opera by Stacie Henrie, Blog Tour & Giveaway!!! 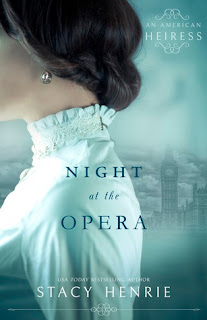 When American heiress Gwen Barton aids an injured gentleman in an opera box in London, she shares a kiss with the stranger that changes her life. More determined than ever to be herself, in spite of the limp she’s sustained since childhood, she will marry for love and not a title. She also resolves to learn the identity of the man she helped—and kissed. Surely he can’t be the irritating Avery Winfield, though. But as circumstances continue to throw Gwen and Avery together, she begins to wonder if there is more to this man than she first thought.

While most of London only knows him as the nephew of a duke, Avery Winfield is actually working for the Secret Service Bureau to ferret out German spies from among the ton. It’s a profession that gives him purpose and a reason to remain a bachelor. But the more he interacts with Gwen Barton, an heiress from America, the more he begins to question his plans and neglected faith. Then he learns Gwen is the young lady from the opera box who helped him. Now his most important mission may have nothing to do with saving Britain from danger and everything to do with risking his heart for the woman he met that night at the opera.

Henrie made me fall in love with the opera, spies, and true love! I loved how she set her book during a time period where American Heiresses were traveling to England to find husbands and gain titles that their wealth could not gain in America. It made the story so much more interesting than the usual regency novels! I loved Gwen so much! She was strong willed, with a huge and giving heart, and she was determined to take care of herself. And then there was Avery! He was blinded to the fact that he could ever have love in his life because his career as a spy would put a loved one in jeopardy. When these two cross paths at the opera is it happenstance or fate? Henrie kept me engaged, interested, and frankly on my toes trying to solve the mystery of who the spy was! All of this while Gwen and Avery are trying to sort out if there is anything to their relationship other than friendship. This book was awesome and I enjoyed every minute spent reading it!

To connect with Author Stacie Henrie:

For more great reviews on the Blog Tour: