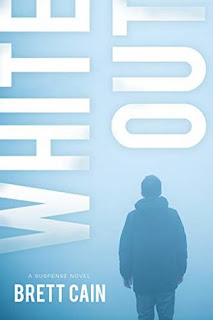 
Long hours of driving on the frigid interstate have taken their toll. In a split second, Frank Sawyer’s car drifts and clips a passing van on the otherwise empty Montana highway. In the aftermath of the wreck, Sawyer encounters a gruesome scene: the van’s passenger did not survive. But it isn’t the crash that took his life—he’s been shot. Before Sawyer can assess what’s happened, he’s struck from behind. When he regains consciousness, he discovers that his attacker is gone, his car is missing—and the police have named him their prime suspect in the dead man’s murder.
The harsh winter weather bears down as the chaos unfolds, and Sawyer finds himself trapped in the small town of Cluff. And law enforcement is keeping him firmly in their sights, so there’s no possibility of escape. As he struggles to clear his name, Sawyer looks to the past for answers, becoming embroiled in a decades-old mystery that may hold the key to proving his innocence.

My Review:
The story started with a bang and I was immediately hooked, wanting to know what would happen to Sawyer and his stolen car. Not to mention the dead body and whoever knocked him out! I love action and suspense stories so Whiteout was right up my alley. The story kept me on my toes the majority of the time and I couldn't help but feel cold from the blizzard Sawyer was in!  I liked the small town of Cliff where everyone knew each other and the author laid the town out so well, I could picture it in my own mind. Sawyer was a great main character; he was driven to help others. And can we mention he is this huge guy who happens to be some type of amazing fighter? Who is Sawyer really? Is he some ex Navy Seal or a former Marine? This reader cannot help but think there is more to his story! My favorite part of the story was trying to solve the mystery of whodunnit. Cain definitely kept me guessing and I was surprised when I found out who and what had actually happened. If you are a fan of action/suspense, you should give Whiteout a try!

Happy Reading!!!
You can pick up your own copy via Amazon.