Out of Liberty Movie Spotlight and Giveaway!!! 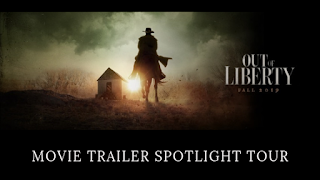 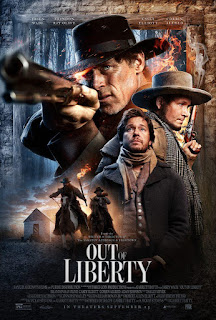 Winter 1839. LIBERTY, MISSOURI. Local jailer, Samuel Tillery (Jasen Wade) is tasked with watching Missouri's most wanted men as they await their upcoming hearing. Caught between the local Missourians' increased drive to remove the prisoners, and the prisoners' desperate efforts to survive, Tillery is pushed beyond what any lawman can endure. Based on actual recorded accounts, Out of Liberty is an intense, evocative western, with an outcome you have to see to believe.


Out of Liberty
Q&A with Director, Garrett Batty

1. Where did the concept come from for Out of Liberty?

I love a good Western, and I've wanted to do one for a while. The events at Liberty Jail involve a triangle of conflict between the jailer, the mob and the prisoners.  It seemed like an intriguing plot to explore.  Amidst some of the better known occurances were attempted jailbreaks, repeated appeals to the legal system and an impromptu court hearing.  With 1830’s Missouri as a setting, it’s the perfect backdrop for a powerful western.

2. What were some high points during the creative process?

Working in independent film is extremely difficult.  It requires a lot of talented, passionate creative individuals to make things come together.  Stephen Dethloff brought in the first several drafts of the script, and it was a high point to see that there was a cinematic story in Liberty Jail.  Then, to be able to cast Jasen Wade, Brandon Ray Olive and Corbin Allred (who came back to acting after a 5 year hiatus just for this role) was a dream come true.  Another high point was getting to see the set of the jail.  We built 2 different sets, to cover interiors and exteriors.  To step onto each set after they were completely prepped for filming made everything feel real.

3. What was your favorite scene on set?

The entire shoot was extremely cold, and the pressure to get everything just right probably impeded me from being able to feel like I had a favorite scene during the shoot.  But now that the film is done, I can look back at some of the scenes and more accurately choose favorites.  There’s a lot of recorded stories about the friendship between Joseph (Brandon Ray Olive) and Porter (Corbin Allred.)  The scenes in which we tried to portray that friendship have become some of my favorites.  Also, the jailer, Samuel Tillery (Jasen Wade) has a classic western stand-off with one of the characters.  I’ve loved that scene from the moment it was in the script, through the final edit.

Any film presents opportunities for learning moments.  Whether in the research phase, fundraising phase, production, post, or distribution, I’m always learning more and more about the process.  One lesson that relates specifically to OUT OF LIBERTY was learning to respect the humanness of whom the story is about.  Often I read historical accounts, but fail to recognize that they are written about real people, who deal with the same human hopes, dreams, faith and fears that I go through.  So I learned to not only show their actions, but to help the audience understand the human emotion that was driving their actions.  So in a moment of weakness, when Sydney Rigdon (Brock Roberts) doesn’t live up to my expectations, appreciating his humanness helps me to be more understanding of his actions.

5. What is the inspiration behind the story?

OUT OF LIBERTY is based on the true events that happened at Liberty Jail in 1839.  Mob rule and public opinion collided with religious liberties and expressions of faith.  It lead to a conflict that escalated beyond what either side wanted.    Today, with ever-present social media and opinionated commentators stirring up reactions and attacks toward any differing belief, the similarities felt very relevant.  Fortunately, we see in both cases, that principled individuals, dedicated to the good of society, can make a difference.

6. What advice would you give to aspiring filmmakers?
Stop aspiring, start doing.  We need great storytellers!

7. If you had to summarize the film in one line what would it be?
OUT OF LIBERTY is a western drama about a jailer caught between his civic job to keep Missouris’s most wanted men held for trial, and his personal duty to protect them from those who want them dead.

8. What do you hope people take away from this film?
When audiences go to the theater to see OUT OF LIBERTY, I hope they come away thinking “Wow, that was an awesome film!  Let’s see it again.”  It’s really a cool story, and to see it in theaters brings it to life in a way that no other format can.

9. What most surprised you in the making of this film?
One of the surprises along they way was how dedicated and committed the cast and crew were to telling this story.  One example of this is with the character of Caleb Baldwin played by Adam Johnson.  I’ve been friends with Adam Johnson for years, and have loved watching him in everything from CHARLY to The Outpost on The CW.  He was gracious enough to come do this movie as a favor for me.  I anticipated he would show up, deliver a good performance, keep the set fun, and be on to the next project.  But Adam surprised me.  He brought a performance that gave a level of humanity and depth that turned Caleb Baldwin into a real person for me.  It was humbling, inspiring, and it has stuck with me.  Every actor gave  their all, and it shows on screen.  It was really quite a nice surprise to have that caliber of talent on this film.

10. What scene was the most difficult to film?
Each scene had its own set of challenges, but for this project I’d have to say the first day of shooting was the hardest.  The film is dedicated to my mother-in-law, who unexpectedly passed away only two days before filming began.  With this personal tragedy very much on my mind, it was difficult to try to focus on the film.  I was grateful to be surrounded by a supportive cast and crew, and a wonderful family.  One message of the film deals with enduring extremely difficult circumstances, so that inspired me throughout the shoot.

11. What other films have you directed?
OUT OF LIBERTY is my fourth feature film.  Other features I’ve written and directed are THE SARATOV APPROACH, FREETOWN and SCOUT CAMP.

One fun story - I was holding auditions, and was surprised when Jasen Wade showed up to audition.  We had never worked together, and it was an honor to have him audition.  He read for a role and did a great job.  But I felt I should ask him to read the part of the jailer, Samuel Tillery.  He looked a little disheartened, but agreed to read for the part.  He was perfect for it!  About a week later, we offered him the part and he graciously accepted.  I asked him to make some time for a call so that we could discuss his approach to the character.  As we discussed the character, he paused for a minute, then said “Wait a minute… I’m just playing the jailer, right?”  He was shocked to find out that the jailer was the protagonist of the film.  He was expecting it to be just a small supporting role.

You can check out the trailer here!