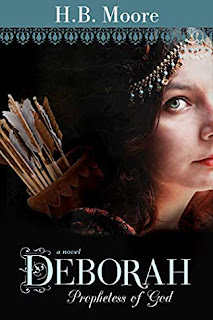 
From 4-time Whitney Award winning author, H.B. Moore, comes the new biblical novel about Deborah the Judge, a woman who rises from oppression and leads her entire nation to victory.After years of mistreatment, the Israelites prepare to defend themselves against the oppressive Canaanites. Readying for war not only takes secret military training but also an Israelite leader who is willing to both stand against generations of oppression and follow God.

Deborah, a young Israelite woman, lives a quiet and isolated life with her father and brothers. As a shepherdess in the hills near her home, she knows well the perils of her work. But when faced with incredible danger, she witnesses a series of remarkable events that preserve her life. The hand of the Lord is apparent, and it is clear that hers will be no ordinary life.
Years later, Deborah is a faithful wife and mother when she learns that the Third Judge of Israel has died--and she has been called to take his place. It is a tumultuous time in history, and soon, Deborah--prophetess, judge, and military leader--faces a seemingly insurmountable task: alongside the commander of the Israelite army, Deborah must lead ten thousand soldiers in their final campaign against their Canaanite oppressors with only her faith in God to guide her.

I honestly wasn't sure about Deborah's story, I knew little of it and I was quite pleasantly surprised by how quickly I was drawn into it. I loved this look into Deborah's life and her becoming not only a prophetess but a judge in Israel. The immense study into life back then by Moore lends an authenticity to the story and brings the reader straight into the everyday life of the Israelite people. The oppression they were under by the Canaanites was shocking and sickening. I wanted the Israelites to rise up and take back their freedom. Training armies, being a judge and a mother, Deborah seemed to balance it all wonderfully. Her story is powerfully told and is one I keep reflecting on even days after I have finished it. Bold, powerful, and majestically written, Deborah Prophetess of God will leave you wanting more.