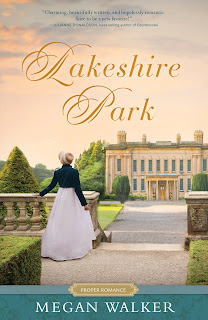 “Charming, beautifully written, and hopelessly romantic. Sure to be a new favorite.”
- Julianne Donaldson, best-selling author of Edenbrooke

“This gentle love story is a treat.”
-Publishers Weekly

“Walker effortlessly amplifies the decorum of Regency England with chic wit and delightful characters who will stop at nothing to reach their nuptial goals.”
-Booklist

Brighton, England 1820
Amelia Moore wants only one thing—to secure the future happiness of her younger sister, Clara. With their stepfather’s looming death, the two sisters will soon be on their own—without family, a home, or a penny to their names. When an invitation arrives to join a house party at Lakeshire Park, Amelia grasps at the chance. If she can encourage a match between Clara and their host, Sir Ronald, then at least her sister will be taken care of.
Little does she know that another guest, the arrogant and overconfident Mr. Peter Wood, is after the same goal for his own sister. Amelia and Peter begin a rivalry that Amelia has no choice but to win. But competing against Peter—and eventually playing by his rules—makes Amelia vulnerable to losing the only thing she has left to claim: her heart.

Walker's Lakeshire Park takes your attention, pulls it into Amelia's world, and does not let you go until you read the very last page. I got so lost and caught up in Lakeshire Park that it transported me from my life into an entirely different world. Amelia's world. It all played out so seamlessly that I could see it in my mind like a movie on the big screen. The witty banter between Amelia and Peter, the shy and budding romance of Clara with Sir Ronald. Georgianna and her own desires, Mr. Rawles...Lady Demsworth; every character made a lasting impression and was critical to the beauty of the story as it unfolded. I could not read it quickly enough and now that it is over, I am left wanting more. Will Walker favor us with a story of another character? I hope it will be so! If you love a true proper romance with emotional upheaval, difficult decisions, and characters you will love, then Lakeshire Park is the book for you!

MEGAN WALKER was raised on a berry farm in Poplar Bluff, Missouri, where her imagination took her to times past and worlds away. While earning her degree in Early Childhood Education at Brigham Young University, she married her one true love and started a family. But her imaginings wouldn’t leave her alone, so she picked up a pen, and the rest is history. She lives in St. Louis with her husband and three children.