The Dark Ones by Rachel Van Dyken, Book Review 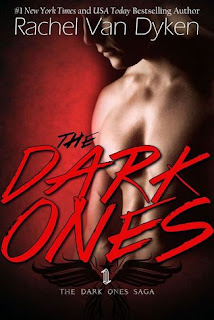 To touch a Dark One is death. To talk to an immortal is suicide. Yet, I've been marked by both. A Vampire. And the King of the immortals. My life is no longer my own. And now I know the truth, my life was never mine to begin with. It was theirs. It's always been theirs.

Once again this blogger knew better than to start an RVD book at night but I did it anyway! And was rewarded with an awesome, heartfelt, emotional, action packed and amazing book that kept me up until the wee hours of the morning. Book hangover aside, I cannot express how great this book was. Van Dyken developed the characters well, so well that I felt like I knew how Genesis would act in certain situations. The background to Ethan and Cassius' characters was phenomenal and this book will knock your socks off! I love how Van Dyken always has a twist or surprise you don't see coming until it slaps you upside your head! The Dark Ones is definitely worth your time to read it and if you are like me, the book hangover the next day!

A Heart's Journey by Kristen McKendry, Blog Tour and Giveaway 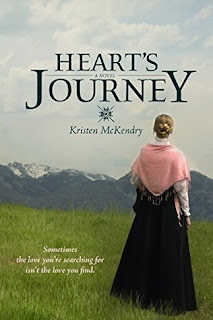 Adventure is in her blood, so when wealthy eighteen-year-old Rachel Hamilton’s treasure-hunting father disappears in the wilderness of British Columbia, she considers only one course of action: she will embark on a quest to find him. But for a well-bred woman with little understanding of the world beyond her upper-class existence, the harsh realities of the trail quickly become apparent. Woefully unprepared for the hardships of crossing a wild and unsettled continent, Rachel is hungry, lost, and distraught when handsome frontiersman Peter finds her in the middle of nowhere. Taking pity on the castaway, Peter promises to escort her to the safety of civilization. Little does he realize he’s taking on a naïve and foolishly brave girl who will test the limits of his patience. But he also discovers the same naïve girl will blossom into a strong, competent, and captivating woman as they undertake an epic journey that will forever alter both their lives.

I have to say that I loved that Rachel is stubborn, I felt like I could relate to her right away on this part! And the fact that she was travelling with her cat was awesome too! It just showed the reader how ill-prepared and unknowing she was about the journey before her! Overall, a great book that takes the reader on Rachel's literal journey to find her father and perhaps, herself along the way!


a Rafflecopter giveaway
Posted by Books Are Sanity!!! at 3:11 PM No comments: 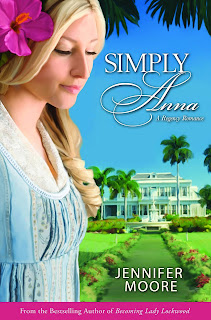 Suffering from a cruel heartbreak, Lord Philip Hamilton has been driven to seek refuge from the painful memories haunting London, and his father’s Jamaican sugar cane plantation provides just the escape he needs. Philip finds solace in his hard work and takes comfort in the fact that his distance from society ensures that his heart will be protected from future entanglements. Protected, that is, until the unexpected appearance of a mysterious woman with no memory of her past. The only clue to her identity is a necklace inscribed with a name: Anna. In a matter of weeks, this gentle, intelligent, and impossibly beautiful stranger turns Philip’s world upside down. But as the bond between the pair grows, the threat of Philip losing his heart once more is only the beginning of the dangers that await. Island renegades and a ruthless band of pirates clash in a swashbuckling battle, and it soon becomes clear that these villains may be the key to unlocking Anna’s past . . .

Jennifer Moore is quickly becoming a favorite author mine! She takes mere words and creates a world with characters that become friends and an adventure you never want to end! Anna and Philip are a pair I couldn't get enough of!I especially loved Anna, her selflessness, she was unassuming, she didn't want t take credit for anything! This book is more than just a story...it has depth, emotions you may not necessarily like, but overall a powerful message. Bravo to Moore for a job well done! 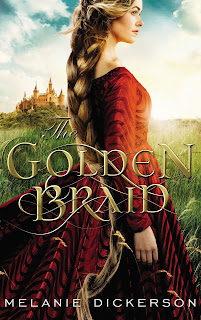 The one who needs rescuing isn’t always the one in the tower.
Rapunzel can throw a knife better than any man. She paints beautiful flowering vines on the walls of her plaster houses. She sings so sweetly she can coax even a beast to sleep. But there are two things she is afraid her mother might never allow her to do: learn to read and marry.
Fiercely devoted to Rapunzel, her mother is suspicious of every man who so much as looks at her daughter and warns her that no man can be trusted. After a young village farmer asks for Rapunzel’s hand in marriage, Mother decides to move them once again—this time, to the large city of Hagenheim.
The journey proves treacherous, and after being rescued by a knight—Sir Gerek—Rapunzel, in turn, rescues him farther down the road. As a result, Sir Gerek agrees to repay his debt to Rapunzel by teaching her to read. Could there be more to him than his arrogance and desire to marry for riches and position?
As Rapunzel acclimates to life in a new city, she uncovers a mystery that will forever change her life. In this Rapunzel story unlike any other, a world of secrets and treachery are about to be revealed after seventeen years. How will Rapunzel finally take control of her own destiny? And who will prove faithful to a lowly peasant girl with no one to turn to?


The Golden BraidDickerson has taken a traditional fairy tale and put her own twist on it! She beautifully develops each main character so you come to love and know them as your friends. She adds in some great faith building experiences for each character and you have the best Christian fairy tale re-telling out there! What amazed me even more was how she put these characters in the exact same time, place and events as one of her previous books! It was so neat to read things from a completely different perspective! Dickerson truly is a master story teller! If you have Christian beliefs, if you like fairy tales, if you just like good books, then run and pick up a copy of The Golden Braid!

You can pre-order your own copy here.