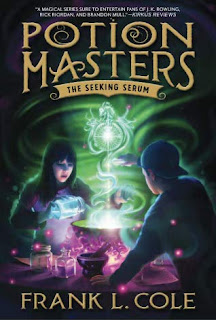 Mezzarix has stolen the Vessel, the source of power for all potion masters, and is preparing to launch his final attack on the potion-making community—which includes his own family.Gordy and his family have gone into hiding, but when his mom uncovers some new information, she takes Gordy into the underground network known as the Swigs, a haven for renegade potion masters and black-market potions, to secure support in the fight against Mezzarix. But when Scourges, rebel potion makers acting on orders from Mezzarix, attack the Swigs, Gordy barely escapes with his life and is forced to leave his family behind.As the fight intensifies between B.R.E.W. and the Scourges, it falls to Gordy and his friends—Max, Sasha, and Adilene—to locate Mezzarix's hidden headquarters, retrieve the Vessel, save the world, and unite the potion-making community.The world of Potion Masters is full of fantasy and adventure as Gordy and his friends learn the power of friendship and loyalty, and to trust in their own individual talents.

Cole concludes the series with book three and you definitely need to read books one and two or you will most likely be completely lost! This is middle grade fantasy, so fans of J.K. Rowling and Obert Skye will most likely enjoy the Potion Masters series! It is definitely fast-paced and pulls you in, so be prepared to sit for awhile! Gordy is a character you will love and along with his friends, you will find yourself cheering for them as they undertake a huge adventure! The best thing about this book is that you can read it as an adult and enjoy it and kids will enjoy it too!

Mostly Perfect (The Women of Ambrose Estate) by Heather B. Moore, Book Review 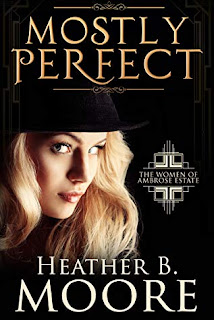 Generations of secrets. An ancient curse. Love has never been an option.Lauren Ambrose has made a life for herself as a fledging artist, far from the ancient secrets and cobwebbed past of her family’s historic estate in Texas. Generations of the Ambrose women have suffered at the hands of a curse, and the last place Lauren wants to spend time is at the Ambrose Estate, among the tragedies of the past. But when her grandmother, matriarch of the Ambrose fortune, requires Lauren to attend an urgent business meeting, she reluctantly travels home.Nick Matthews is ready for a battle. Lillian Ambrose, co-founder of Ambrose Oil, has agreed to hear his investment idea, but no one has ever successfully partnered with the business tycoon. When he arrives at Ambrose Estate, prepared with weeks of research, the last person he expects to meet is Lauren, a dynamic and captivating woman with a past full of secrets. As Nick gets to know Lauren, he discovers she is mostly perfect for him, except for one, major drawback . . . The curse that has the power to destroy everything between them.The Women of Ambrose Estate series:Mostly DangerousMostly PerfectMostly PerilousMostly Risky

This series is amazing for a number of reasons! The first one is that you can read each book as a stand alone. Having read them all is nice to tie things together, but it is absolutely not necessary. The Ambrose curse has been hard at work for years and no men tied to an Ambrose girl has lived to tell about it. So Lauren shies away from the one man who shows he cares, but does he? Is he interested in her for her family's money and business or does he actually care for her? And if he does, how can she actually be with Nick because the curse will kill him; it is only a matter of time. The world building is fantastic and I was completely swept away into the Ambrose world! If you love a book with substance that is easy to read and will have the pages flying, then this is definitely the book for you!

You can pick up your own copy Amazon.

Under the Stars by Carolyn Twede Frank, Blog Tour & Giveaway!!! 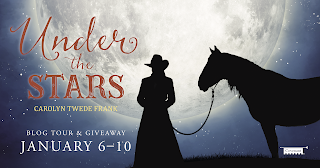 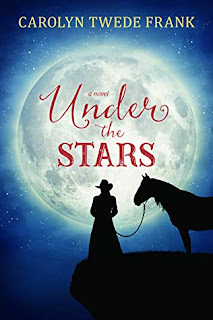 When the new marshal in town needs volunteers, one of the first to sign up is Miss Rosie Decker. And why wouldn’t she? She’s a sharpshooting, horse-taming tomboy—and she’s out for revenge. Marshal Hank Walker is forming a posse to find the man who killed her sweetheart, and Rosie is determined to help track him down. When the marshal refuses her service on account of her being a woman, Rosie is undeterred. If it’s a man Marshal Walker wants, it’s a man he’ll get.

With his posse assembled, Hank Walker is confident he’ll be able to track down the criminal. His confidence grows as he recognizes the incomparable skill of one young man in his posse—Ross. That is, until the day Ross’s mustache falls off, revealing “his” true identity. Rosie Decker has duped him. Banished back to town, it’s time for Rosie to prove her mettle. Though working alongside the unwilling marshal is complicated, it is the unexpected tenderness she feels for him that proves most problematic. How can she demonstrate her skill while also setting out to win the heart of the man who seems bent on keeping her out of his way?

I was intrigued by Rosie and how she was such a rough and tumble girl in the west! She wasn't afraid to be herself, which included being a ranch hand and slinging a six-shooter! She impressed me with her ability to be herself and go after what she wanted. The guts it took to dress in disguise as a man to join a posse headed to find her sweetheart's killer was impressive to me. She was one tough woman with sharp shooting skills, a calm presence amidst a group of men, and a determination to rival any cowboy in the wild west. If you like romance and westerns, you will enjoy Rosie's story in Under the Stars!

I grew up in Payson, Utah. Ever since elementary school I have loved to write. In junior high and high school I was on the newspaper staff. My senior year, I even had my own column: Carolyn’s Corner. While attending USU as a freshman, my journalism teacher, in an effort to “prepare me for the real world of writing," tore down my work to the point that I gave up, dropped my minor of journalism, and concentrated on my other love—biology. I graduated with a BS in Horticulture and an MS in Botany and went on to start my own business in a totally unrelated field: manufacturing puppets.  In 2006, after having raised my five kids and growing my business to a point of being viable to sell, I rediscovered my love of writing. I have since sold my manufacturing business and I spend a good portion of my time writing, or helping my grandkids and my garden grow. I now live in Kaysville, Utah.
​
www.carolyntwedefrank.com 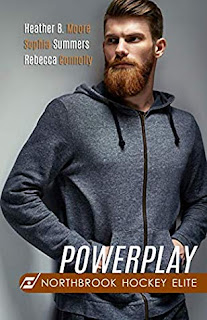 He’s ready to quit his pro-hockey career. She’s doing everything to keep her career afloat. And neither of them have time for distractions.

Jax Emerson, legendary forward for the Chicago Flyers, is ready to throw it all away when he uncovers the truth behind his NHL contract. The last thing he needs is more media attention, or his father to get involved in his contract, or a beautiful woman apologizing once again for an accident.

Meg Bailey didn’t think her life could get any worse, until it does. Time is running out before her business is forced to close. When Jax Emerson offers a solution, she knows that by accepting his help, she might be getting in too deep. And deep is not a place her heart is prepared to go.

Six professional hockey players used to play on an elite club team together, but have all separated and now play in the pro-hockey leagues. Not all of them were friends, yet circumstances bring them together, and for the greater good, maybe they can put aside their differences.

Powerplay is Jax and Meg's story and man does it start out with a bang! Literally! Meg hits Jax with her car because he is completely angry and distracted. Their story starts out in a strange way I never saw happening. Each of them had issues and problems they were facing and that is what really connected me to the story. Everyone has problems no matter what their life is like. I could relate to that and it drew me in as a reader. I enjoyed watching Jax and Meg's relationship grow and change. Meg's grandma was a minor character but I have to mention her, she was awesome! I loved that Meg was so close to her. This was an easy-to-read, fun, and swoony book for sure!

Rebecca Connolly writes romances, both period and contemporary, because she absolutely loves a good love story. She has been creating stories since childhood, and there are home videos to prove it! She started writing them down in elementary school and has never looked back. She currently lives in the Midwest, spends every spare moment away from her day job absorbed in her writing, and is a hot cocoa addict.

Heather B. Moore is a USA Today bestselling author of more than fifty publications. Her historical novels and thrillers are written under pen name H.B. Moore. She writes women's fiction, romance and inspirational non-fiction under Heather B. Moore. This can all be confusing, so her kids just call her Mom. Heather attended Cairo American College in Egypt, the Anglican School of Jerusalem in Israel, and earned a Bachelor of Science degree from Brigham Young University in Utah. Heather is represented by Dystel, Goderich, and Bourret.

Sophia Summers is an award winning author who just wants to relax a little and enjoy a great beach read. She lives in a quiet southern town brimming with an extra dose of hospitality and a whole lot of charm.

She writes historical romance under a different name. You can follow her on http://www.sophiasummers.com. Be SURE to join her Newsletter for freebies and fun.


Newsletter: https://landing.mailerlite.com/webforms/landing/o8w5d8?fbclid=IwAR1AkRSJ3rI1w_U1WnlqZg3nAWev_wEFveu7CDcu5CKVuvfkYomZ2gZ5Wrs
Posted by Books Are Sanity!!! at 1:00 AM No comments: