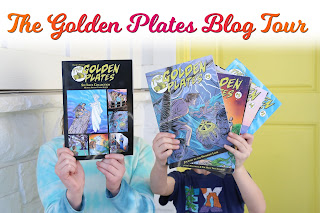 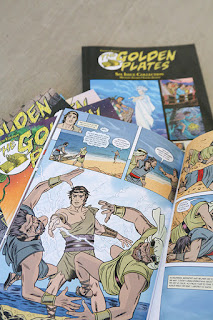 The Golden Plates is an illustrated adaptation of the fifth best selling book of all time, The Book of Mormon: Another Testament of Jesus Christ, which has sold over 120 million copies. This graphic novel/comic book adaptation was first created in 2005 by award winning artist Michael Allred. The Premium Edition has replaced the full text originally included in the first edition with simplified and edited text, making the story easier for younger readers to follow and also showcasing more of the stunning artwork. It has also been converted to digital form for enjoyment on phones, tablets, and desktop devices through Amazon, iTunes, and Kobo. New printed editions have also been released through Amazon.
​
The first 6 issues cover the first 145 pages (27%) of the Book of Mormon, from 1st Nephi through the Words of Mormon. This adaptation is a fun and enthralling to way to help older children and teens understand and enjoy the Book of Mormon in a format more advanced than simplified children's stories or scripture readers meant for young children.

I am not a big comic book person, so it is kind of funny that I ended up reviewing this one. Anyhow, I only received the first book in the six book series. I showed it to my 8 and 10 year old to see what they thought. My 10 year old was definitely more interested in it than my 8 year old, but both enjoyed looking at the illustrations. My 10 year old said it was good, and it was easy for her to read and understand what was going on. I like that it simplifies the Book of Mormon scripture stories so that it is easier for anyone really, to understand them. The illustrations help you to visualize what is going on in the story, so that is definitely a plus. I think it could be a great tool for a teenager struggling to read their scriptures since it is comic book style, not little kid style. Anyone who is struggling to get their BOM time in, this could help get them excited about the scriptures again. I could also see families reading it together. If you are LDS, and you like comic books, I definitely think you will enjoy this series of the Book of Mormon. It is well written and any comic book lover will enjoy this!

You can pick up your own copy here. 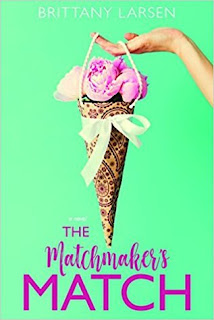 Eliza Woodhouse has everything a girl could want: a delightful little beachside flower shop, a loving family, and the best friend a girl could ask for. And while she suffers a chronic lack of romance in her own life, the bohemian beauty is a self-proclaimed matchmaker extraordinaire, as evidenced by her recent successes. Having found a fiancé for her sister and a boyfriend for her best friend, she is now taking her lovelorn new employee under her wing. Yes, life is working out quite nicely for Eliza. Until Parker Knightley walks back into her life.After three years in Hong Kong, Parker is in town for his brother's upcoming wedding to Eliza's sister. They've all known each other their whole lives, and Eliza will never be anything but Little Liza Belle to her handsome childhood tormenter. So the fact that their siblings are getting married simply puts Parker one step closer to becoming the big brother he and Eliza have always joked about him being. But the more time they spend together, the more confused Eliza's feelings become. Because she has come to the shocking realization that the role of brother is the last role she wants Parker to play in her life.

I really enjoyed this fun and upbeat contemporary romance! Eliza was so spunky, positive and full of life! Her personality leapt off the pages and her need to fix and help everyone was endearing. She was truly a giving person who was always thinking of others first. Parker was every girl's dream guy and Eliza seemed to be clueless to what was right in front of her face. Was he her faux brother or could she dare hope he could be something more? She was too busy trying help and fix everyone else to truly think of her own feelings.  And besides, she wasn't ever getting married...that was for her sister and her best friend.  At times I became so frustrated with Eliza, could she really be so clueless to her own feelings and those around her? But I cheered as she matured, grew and realized what she needed to do in her life. This was a fantastic read, I didn't put it down until I had read the entire thing!

Source:  Publisher for review
Posted by Books Are Sanity!!! at 1:00 AM No comments: 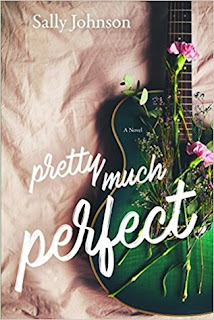 Camille Weston, a recently returned missionary, anticipates returning to college for her degree and perhaps to meet a nice guy. A sensible young woman with her future mapped out, Camille would never do something dangerous—like pick up a stranger on the side of the road. And yet, inexplicably, she does just that. This is one split-second decision that changes everything.

Determined to lend assistance, Camille gets more than she bargains for when she is roped into helping Liam, a handsome British man, with more than just a ride. As they are thrown together over the coming days and their mutual attraction grows, they realize they just . . . click. That is, until she makes a shocking discovery: the mysterious stranger is William Liam Jones, lead singer of the popular band Gear. Camille has never been one to swoon over a celebrity, and she knows her and Liam's lifestyles could never be compatible. But how can she convince her heart to listen to logic?

Where has this book been all my life?!? It is hands down amazing and I couldn't get enough of it! Camille is a straight shooter, straight laced Mormon girl, and happens to be clueless when she stumbles upon famous rockstar Liam. It seems she is the last one to know who he actually is. And the budding attraction is too hard to ignore between the two of them. But Liam isn't a member of the church and Camille feels like they could never work....but could they? Is what is happening between them even real or is it just a fling for Liam? I absolutely devoured this book, DEVOURED it people! Johnson takes you on one heck of a ride and I was all in with my hands up in the air, enjoying every single moment! This is the book you don't want to miss out on! This is the book that will keep you up all night long and when it is over you will want to throw it (or your kindle) and demand that the author give you more because it is over!!! Buy this book, it is that simple.

a Rafflecopter giveaway Shout out to my brother Jeremy Eveland who's been helping me with my classes. Thanks bro!
Posted by Books Are Sanity!!! at 1:00 AM No comments: 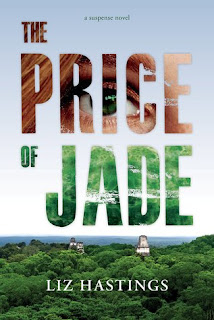 With its lush rainforests and awe-inspiring ruins, Guatemala has always played a central role in Matt Miller's life. The stunning land where he once served as a missionary is now a vital part of his importing business, and after years of anticipating a trip to the exotic country with his wife, Cathy, and teenage daughter, Melissa, it's finally happening. But what begins as a dream vacation soon spirals out of control as the Millers face every parent's worst nightmare: their daughter has disappeared without a trace.
Every second counts as Matt and Cathy throw themselves into the most urgent search of their lives—a search that becomes frantic when a ransom note arrives. As Matt traverses dense jungle and remote villages, relying on the help of an unlikely band of Good Samaritans, it is clear that Melissa's kidnapping was far from random. There is a network of greed and deceit that runs deep, and no one can be trusted. Desperate to protect his family, each step leads Matt closer to a ruthless killer. And what he discovers points to a greater deception than he could have imagined . . .

So in full disclosure, when I picked this book up to start reading, I wasn't quite feeling it. But it didn't take me very long before I was completely out of my own world and transported to Guatemala. Cathy and Melissa were on a once in a lifetime trip and were missing their husband and father, Matt. While they were there the unthinkable happens and Melissa disappears. The action and suspense in the novel were so real my heart was pounding at times. I was trying to figure out who would do this to a teenage girl and why. Hastings did a great job of keeping me guessing until it neared the end where I figured it out. But by no means does that diminish the intensity and heart stopping moments of this book! There are so many elements and layers to this story which make it so fantastic. Faith, fear, prayer, redemption, loyalty and forgiveness to just name some. This book is a wonderful read that kept me engaged and I look forward to reading more from Hastings in the future!