Trusting the Law by Kendall Evans 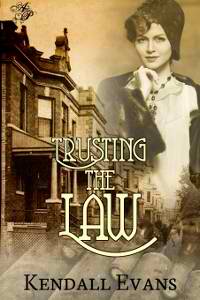 The last person Grace needs to fall in love with is a police officer, especially since she breaks the law every day. Running a speakeasy wasn’t her first choice, but making money is. With the price of hooch at an all-time premium, the money is more than enough to pay for her uncle’s expensive medication and the bills. She doubts Officer Paul Gordon will see things the same way.

Paul is enchanted with the chestnut-haired woman he runs into on a cold, Chicago street, and that enchantment quickly turns to more. If someone were to tell him she was a criminal, he’d never believe it. Then he sees it for himself. When Grace is arrested, he must make a decision—protect her or his badge.

Trusting the Law is a unique historical novel set during the Prohibition Era.  Grace can't seem to make ends meet and takes up running a speakeasy to pay the bills.  She meets a police officer one night and sparks fly between the two.  Grace dates Paul even though she is a criminal in the law's eyes, unbeknownst to him.  This novella is definitely true to the time period and also has great character development for a short story. I  understood why each character chose the paths that they took, however, I was extremely frustrated with one of them!  This short story carries you on an emotional journey as you follow Grace's story.  It is a nice read, but didn't wow me.  Three stars out of five.

You can pick up the Kindle version via amazon here.

You can pick up the  Nook version via barnes and noble here.


I received this book for free.  This is my honest review.
Source:  Author