Today I have the privilege of interviewing author Marissa Burt on my blog!  Thank you Marissa for taking the time to stop by and answer some questions!  Marissa's middle grade novel, Storybound has been a smashing success and she recently released the sequel to it, Story's End. 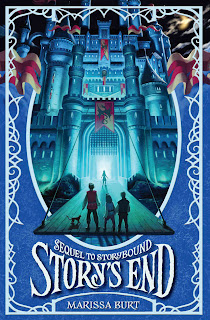 Inkheart meets The Neverending Story in the sweeping sequel to Storybound. A deadly Enemy has returned to the magical land of Story—and twelve-year-old Una Fairchild may hold the key to defeating him.

Long ago, a King ruled the land of Story....During his reign, Heroes, Villains, and characters of all kinds lived out Tales filled with daring quests and epic struggles. Then the King disappeared, and over the years nearly everyone forgot that he had ever existed.

Now an evil Enemy has emerged, determined to write a new future for Story. And an ordinary girl from our world named Una Fairchild must find a way to defeat him.

Una and her friends Indy and Peter set off on a quest for answers, facing warlocks, beasts, and enchantments at every turn. But Una soon discovers that the real key lies in her own mysterious ties to Story’s past—and to the long-forgotten King who may be their only hope for survival.

Storybound has been praised by Kirkus Reviews for its “richly imagined world” and by Publishers Weekly as “an appealing fantasy with strong writing and interesting characters.” Story’s End is filled with the same breathtaking action, heartwarming friendship, and timeless appeal. Readers will leap at the chance to return to this captivating fairy-tale world, which is perfect for fans of Inkheart, Gail Carson Levine, and classics like A Wrinkle in Time.

Now, on to the interview!!!

Well, I have three young boys age six-and-under, so they are my main job - haha!  My eldest started kindergarten this year, but most of my day-job involves preschool-age shenanigans like storytime at the library, rainy walks, and lots of playdough.  I typically work on writing-related projects on Saturdays and am busy with my family and other responsibilities the rest of the week.

2.  Where did the inspiration come for Storybound?


Storybound was born out of my own love for fantasy worlds.  When I finish a good book, I'm always a little sad to turn the final page and say goodbye to my character-friends.  As I thought about this, I began to wonder what it would be like if all the characters lived in another world and what might happen if a reader from our world got dropped into theirs.  And that was the beginning of Una's Tale.

3.  Did you know the ending of the book while you were writing it?

Great question!  I had a general idea of where the story would go, but I did not have a detailed outline or anything of that sort.  There were a few scenes that were crystal clear in my mind, and the rest has changed quite a bit with each revision.  In fact, early drafts of the novel would probably be strikingly different from what readers encounter today!

4.  What is your favorite part of being a published author?

One of the great perks is that I get to immerse myself into an imaginary world for my job!  If you love to read, you'll know the magic of reading transports you to fabulous places.  And writing is often a more intense experience of this same sensation.  I also love hearing from readers!  "Talking books" is one of my favorite things to do.


What an impossible question!  :)  It probably depends on the day and what I'm reading at the time.  L.M. Montgomery's novels have stood the test of time for me - I still re-read them quite often.  I also love C.S. Lewis' work.  When I was a middle-grade reader, Solo's Journey by: Joy Smith Aiken was my absolute favorite - I read it countless times!  It's out of print, now, but if you can find a used copy, pick one up!

7.  Do you enjoy reading or writing more?


This is a tricky question.  I think I'd have to say I enjoy reading more.  It still remains my absolute favorite thing to do, and I spend a good deal of my spare time with some book - I even have audio books queued up to listen to while I do housework.  While I like writing, it involves more work, so it comes in a close second.

I love to read all sorts of things.  As far as fiction goes, my favorites are fantasy, mystery, and historical novels, although I'll read just about anything if it comes with a good recommendation!  For nonfiction, I mostly read theology and books having to do with parenting and the occasional housekeeping book.  I'm forever checking out cookbooks from the library even though I loathe cooking and am not very good at it. Hope springs eternal!

9.  Will there be more books after Story's End or will you start a new series?

I'm happy to say that I'm working on a new series now that should be out from HarperCollins Children's in 2015.  The first book, tentatively titled THERE WAS A CROOKED MAN, tells the story of Wren, a clever girl who discovers she is part of an ancient guild of magicians tracing back to the Dark Ages, whose secret histories are mixed up with the Mother Goose children's rhymes.  I can't wait for you all to meet Wren!

Thanks so much, Crystal! 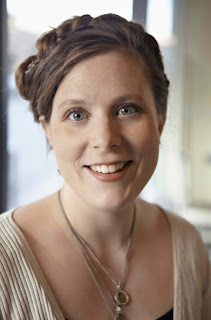 About the author: Marissa Burt was forever getting notes sent home from teachers about reading novels during class.  She grew up in Oregon, and drifted eastward through Colorado, Illinois, Tennessee, and South Carolina before coming back to the Pacific Northwest.  She now lives in the Seattle area with her husband and three sons.  You can visit Marissa online at www.marissaburt.com.

A big thank you to Marissa Burt for taking the time to answer these questions! :)