Release of Shatter (Seaside #3) by Rachel Van Dyken and Giveaway!!! 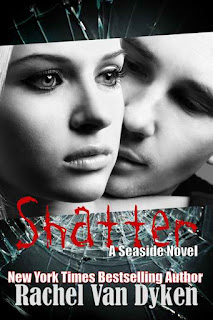 Sometimes the only way to heal... is to shatter.


Rock star Alec Daniels has it all. Love, fame, money... But being in the limelight isn't all it’s cracked up to be, and after one bad choice comes back to haunt him he is left picking up the pieces of his carefully constructed life. Now he faces the toughest decision of his life:
Deal with his mistake like a man, or dive back into the dark hole of depression, drugs, and denial that have been his comfort for so long.
One wrong move could destroy everything. His girlfriend, his family, and his future.

And just for fun, here's a tiny excerpt:

Her eyes widened a bit when I purposefully flexed my arm and then she looked down, a beautiful pink blush staining her cheeks. “Remember how I feel about your blushing?” I whispered, trying with very ounce of self-control I possessed, not to make a complete fool of myself and toss her over my shoulder cave-man style.
“Is it the same way you felt last night about—”
“—And we’re done.” My brother Demetri cleared his throat, appearing out of nowhere. “Can a person un-hear something? Anyone? Anyone?” He shook his head as if that would make everything go away and cursed. “Seriously, I’m almost embarrassed for the sand.”
“Why the hell would you be embarrassed for the sand?” I rolled my eyes and pulled Nat into my embrace, trailing my hands down her arms. I couldn’t get enough of her. Not by a long shot. Even touching her was enough to send my control out the window. Ha, she thought I had control. No. What I had was a lot of guilt that made me feel the need to control every damn situation until I thought I was going to shatter.
“Because you guys were all…” Demetri put his hands in the air and scowled. “Fornicating.”
“Fornicating?” I laughed, a bit thrown off that he not only knew a four-syllable word but the meaning behind it. “How the hell does one fornicate without—”
“—Okay, sorry to break this weird love triangle up…” Jaymeson stepped beside Nat and me. “But we’re supposed to go over to the bonfire and pretend to be bonding.” Jaymeson was an action star from the UK and one of our good friends. At least he was someone I could count on during all of the chaos that was our lives. I was actually relieved when they asked him to be part of the show. Against popular opinion, he was actually a really clean-cut guy. He never did drugs, never drank, and spent every Easter with his ninety-year-old grandma. Sometimes I hated that he made it look so easy. Fame wasn’t a big deal to him. Granted, he also slept with anything that looked cross-eyed at him, but whatever. He claimed it was because Americans were easy.
“Ah, reality TV at its finest,” I muttered back to him.
“Cheers.” Jaymeson winked at Nat and then slapped my ass. I lunged for him but Nat’s hand slipped to where Jaymeson’s hand had been, making me totally lose my train of thought. I sighed and kissed Nat gently across the lips. Her wet tongue licked my bottom lip and then slipped into my mouth. I wanted to throw her onto the ground.
“And we’ve come full circle.” Demetri cleared his throat. “Back to fornicating.”
I groaned against Nat’s mouth and cursed. “Do you really have nothing better to do than sit here and watch us fornicate? Really, Demetri? Is life that boring without drugs?”
Because of me, my brother had nearly killed himself last year and was finally out of rehab. I couldn’t take credit for pulling him out of his funk — nope, that honor went to Alyssa. She challenged him enough to grow a pair and put on his big boy pants.
Demetri’s wide smile did nothing for my mood. He pulled out a piece of taffy and winked. “Just getting you back for walking in on me and Alyssa.”
It’s possible I’d been ruining my brother’s mojo purposefully just to piss him off. I’d happily take that to my grave.
“Dude, you were moving slower than a snail.” I smirked and made a slow crawling gesture with my hands.
Laughter bubbled out of Nat. “So true.”
Demetri cursed. “If a snail is a kick-ass-ninja-track-athlete, then yeah. I was moving just like that.”
“Did he just compare himself to a ninja snail?” A female voice said from behind us. We all turned. Alyssa, Demetri’s’ girlfriend, was shaking her head and laughing. “Wow, wonders never cease. What were you yesterday, Demetri? A turtle, was it?”
“A turtle?” I repeated. All eyes turned to Demetri.
My brother’s eyes hooded with desire. “You can ride my shell anytime, you—”
“Children!” Jaymeson yelled from the bonfire. “If you’re all done getting in each other’s pants, we’ve got some fake filming to do for the future leaders of America!”
“Truer words have never been said.” Nat nodded solemnly.
“What we do, we do for our country,” I agreed as I grabbed her hand and kissed the back of it. “Later though?”
She winked. “Oh, I promise.”

a Rafflecopter giveaway
Posted by Books Are Sanity!!! at 8:32 PM