By The Stars by Lindsey Ferguson, LDS Blog Tour 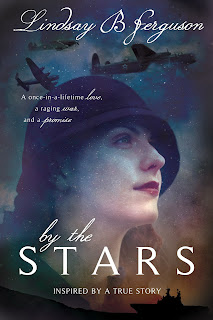 He was lost. Lost in those deep brown, beautiful eyes.
As clear as day, Cal heard a voice inside his head:
"That is the girl you are going to marry."

Deep in the alcoves of 93-year-old Cal Morgan's mind is an unexpected and intriguing past.
Recollections of growing up a farm boy during the Great Depression, learning to foxtrot in the
largest ballroom in America, and serving as an infantry soldier in World War II are fragments
of his memories. But perhaps above all, a once in a lifetime love story is seared in his soul,
reminding us that some things in life are meant to be.


When Cal finally gets a chance with Kate, the girl he's loved since grade school, their easy
friendship quickly blossoms into a meaningful romance. Spirited and independent, Kate
keeps a guarded heart due to a painful past, and Cal wants nothing more than to gain her
trust. But the WWII draft calls him to the war in the Pacific and with no way of knowing when
and if he will return, Cal prepares to part from her for good. After he's gone, what Kate does
next changes everything.

In the suffocating jungles of the Philippines Cal encounters the chilling life of a soldier and
deadly battles of war. But with Kate's memory always near and willing him on he puts his trust
in God, ultimately driven to return to her. Inspired by a true story, By the Stars is a romance that
stands the test of time and the most intense obstacles.

By the Stars is a beautifully written love story set during World War II.  I easily fell into Cal's
story and his gentle, kind and unassuming way. Kate was vivacious and I felt like I could
see the sparkle in her eyes! Cal's story is slow moving at first, but picks up speed and
holds it until the end of the book. Ferguson has captured the most poignant love story
that had me wondering if it would survive the battles and missions of World War II. Cal's
story transcends time and will resonate with readers everywhere. It will resonate with
all who remember a time long ago or a time told to them by their grandparents or great
grandparents. This is truly a book that will leave you feeling good by the time you
are finished! 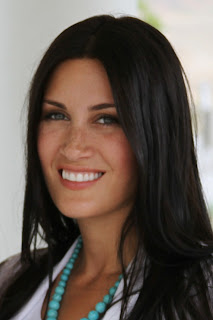 Author bio:
Lindsay Ferguson has been immersing herself in stories since her childhood days of sneaking
a flashlight into her room and staying up reading The Babysitters Club series way past her
bedtime, writing spinoffs of The Twelve Dancing Princesses, and imagining herself in fascinating,
far-off places. She still dreams of traveling the world one day, and finds getting lost in a good
book almost as absorbing as penning her own stories and experiencing them unfold. A
Communication graduate from the University of Utah, she worked as a PR and marketing writer
for a computer software company for several years before resigning to focus on raising her
family. She has also contributed lifestyle articles to various media outlets. When she felt the
itch to attempt novel writing a fascination with history created a natural inclination toward
historical fiction, with a romantic flare, of course. She lives in a suburb of Salt Lake City with
her husband and four children. By the Stars is her first novel.